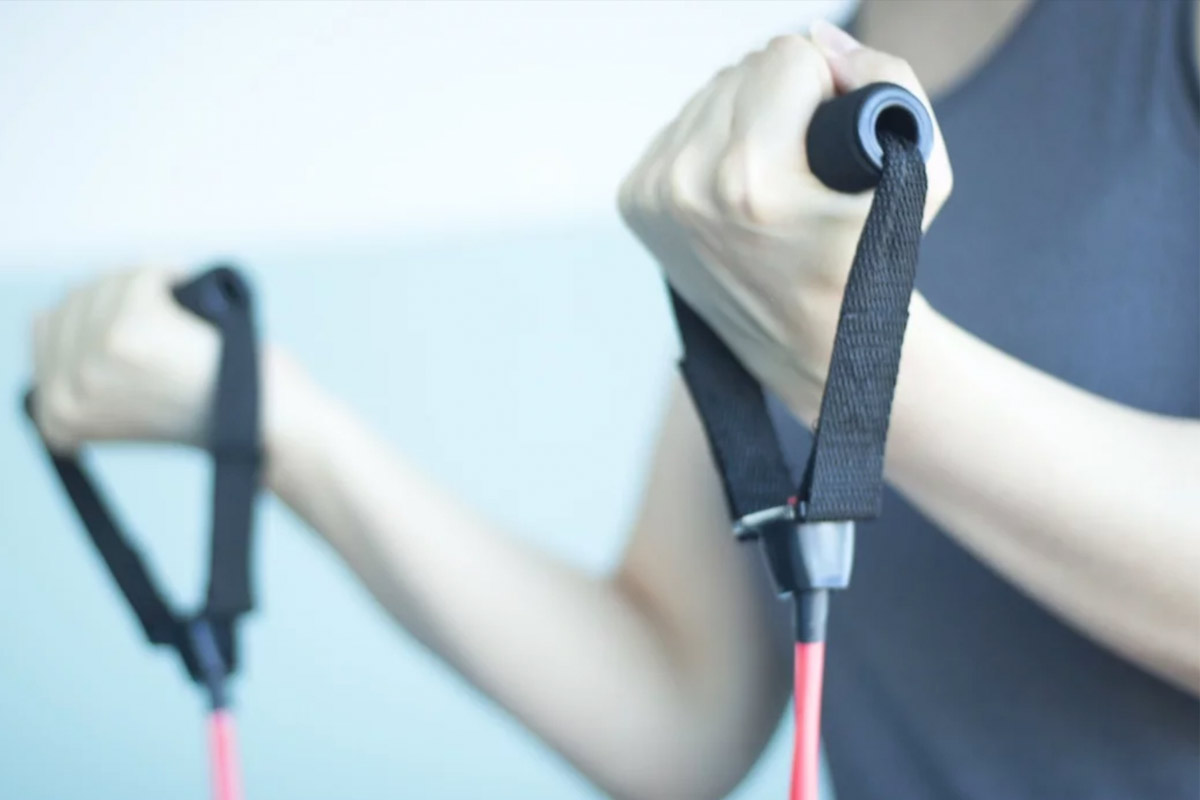 For an exercise to be included in the Kenzai Body program, it has to pass several tests. 1) Is it safe? 2) Is it easy to understand and do? 3) Is it hard to mess up? 4) Can it be done in a hotel room? 5) Can it be done alone?

If an exercise fails any of those questions then it doesn't make the cut.

Most areas of your body can get a great workout using just two pieces of equipment; gravity and the body itself. These bodyweight exercises are the ideal way to train for most people. The average person just wants to be lean, strong, and coordinated. Dynamic bodyweight exercises are the perfect match for these goals. Using gravity and your body you can build very strong legs, chest, back and core muscles. And when you train using your own bodyweight, your physique finds a pleasing natural harmony, meaning nice muscle tone and definition without bulk or lost flexibility.

However, it can be tricky to work the biceps, triceps and shoulder muscles using bodyweight exercises exclusively. It isn't impossible, but the exercises you'd have to do break the other rules (not safe, hard to understand, and easy to mess up). This is when we reach for our only real piece of Kenzai "gear", the trusty resistance band. 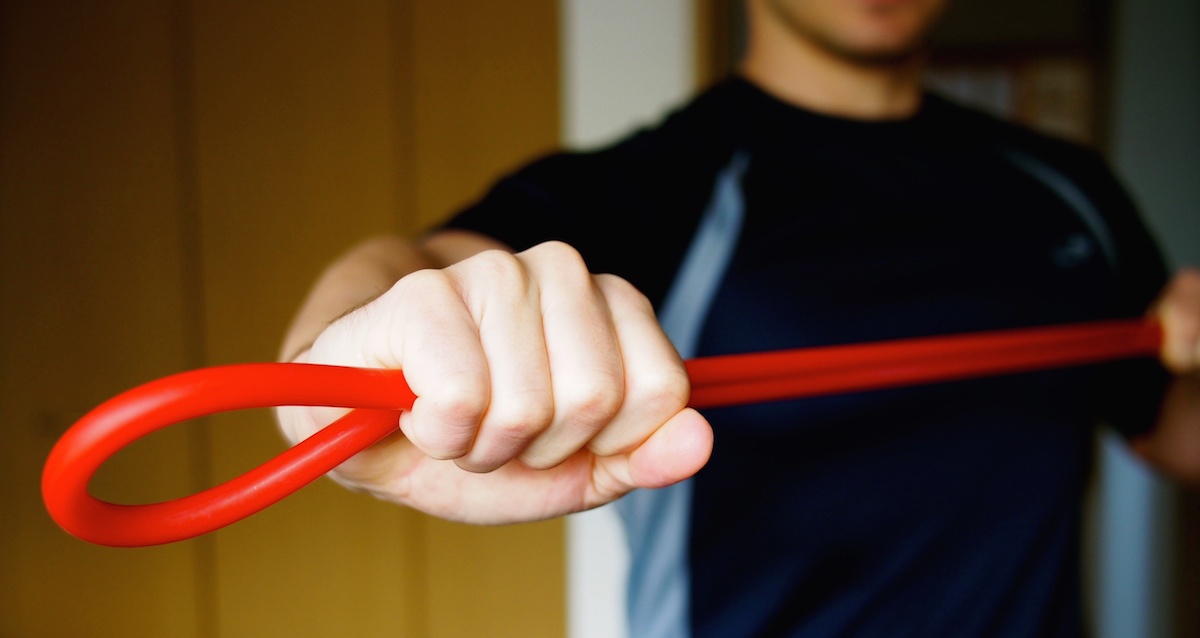 A lot of people ask me why we use resistance bands and what their merits are. Time for some answers. Let's go to band camp!

There's endless chatter about which exercise is most effective for building muscle. Enthusiasts will dive deep into anatomical studies showing that if the elbow is held at 35°rather than 45° the muscle is isolated with 10% more efficiency, etc... But it's glaringly apparent to me that the exercise that's most effective is the one that you actually DO.

Our members are busy, hardworking people, they don't live for the gym and they don't live IN the gym. They need exercises that travel. Hence the hotel room rule. All of our equipment fits in the corner of a carry-on bag, and all of our workouts can be done anywhere. This means you don't get to skip a workout using the "I can't get to the gym" rationalization. You ARE the gym.

The exercise that's most effective is the one that you actually DO.

A resistance band fills out many of the exercises that bodyweight can't hit. With a band you get access to the entire family of biceps curls, triceps extensions, and with a door anchor you add rowing, pull-downs, and all the chest and shoulder flys. This is an amazing amount of versatility for something so light and portable.

This is for me the biggest argument for resistance bands. They set you free. Free from bulky, expensive equipment and the gyms that charge you to use it. Free to get great workouts anywhere, anytime, even on business trips or vacations. FREEDOM!

Not your grandmother's resistance bands 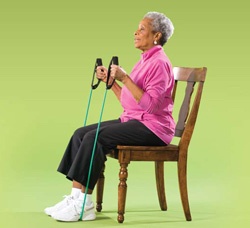 A lot of people have experienced resistance bands in a rehabilitative context. They're a favorite tool in elderly care homes and post-operative recovery wards. These types of bands are designed to be extremely light to give the patient muscle stimulation with no chance of injury. This has caused bands to be seen as a kind of joke for building "real" muscle.

We're not talking about wimpy Therabands here. We're talking about the new generation of resistance tubes made out of better materials and with the all important cloth handle and rotating grip. This turns a band into something every bit as useful as a dumbbell. These bands come in all kinds of lengths and resistance levels. I've got one I call "the cobra" which I can barely get 5 curls out of before hitting failure. That's the equivalent of a 40 pound dumbbell, calling on 360 pounds of force from the biceps. Powerful! Which leads us right into the next point...

Beating physics at its own game

If you're using free weights, you've got two forces working in any given exercise; the power of the muscle working across a lever, (meaning your bones) and the force of gravity pulling the weight down. Long levers make for stronger force.This results in some odd outcomes. Take a simple biceps curl for example. The strongest part of a curl will be when the forearm is at 90° to the elbow. At this point the biceps is having to work its hardest against the weight's gravity pulling down on the lever arm.

[Math alert! This works out to the following equation: torque = (sinƟ)(forearm length)(weight), where Ɵ is the angle of the elbow, meaning that at the largest Ɵ of 90°, the torque required will also be highest.]

After you pass the 90° point and get to the top of the rep, the curl actually gets easier. Or, to put it simply:

However, when using a resistance band, every little bit you extend makes the resistance stronger, meaning you get a clean, tough exercise through the entirety of the rep, with the hardest point being at the farthest extension of the exercise. 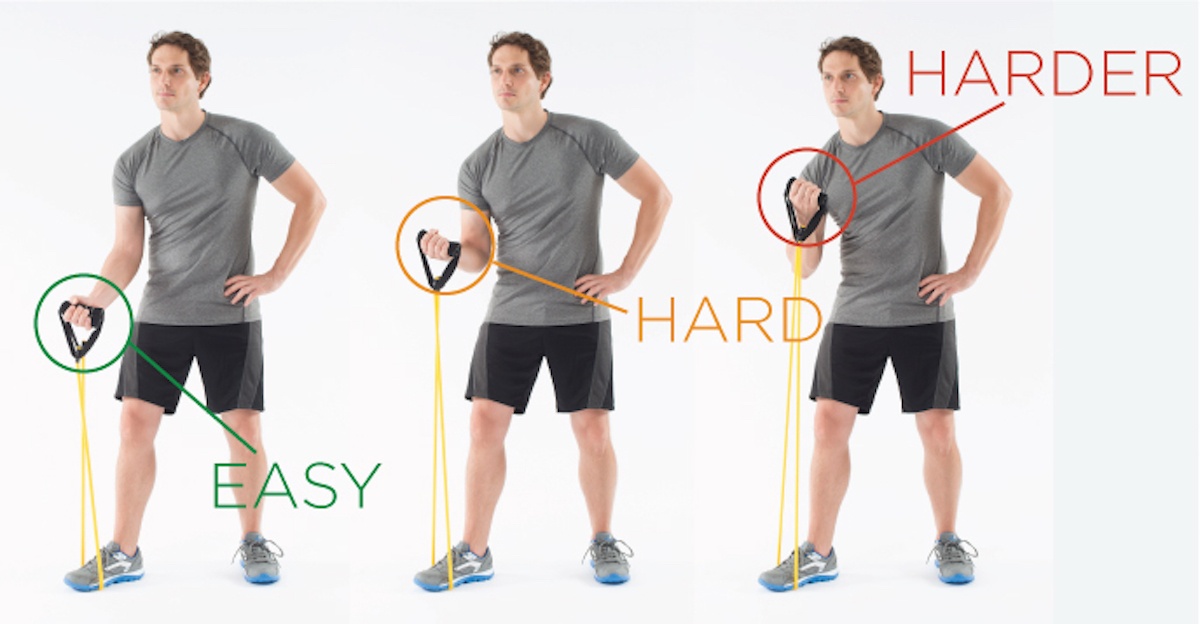 Many resistance band exercises are actually more effective than dumbbells or machines because of this gravity-beating quality. I've seen people work with both weights and bands, and the clients that use bands have the same if not better muscle definition than the clients who stick to the weight room.

Adjusting on the fly

If you're working with the door anchor raising the resistance is even easier. You just take a step away from the anchor point, making the band more tense and increasing the challenge.

This means you can take on 6 sets of an exercise and easily raise or lower the resistance as you go to get the best burns possible. You'd need an entire rack of dumbbells to have the same experience with weights.

Breaking the spell of arbitrary numbers 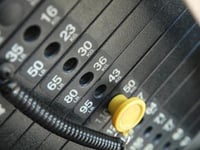 Because it's so easy to change the resistance on a band, there aren't set pounds or kg of weight to think about when you exercise. This helps people get away from numerical analysis of their fitness and helps them get a more intuitive understanding of the amount of power they have. If you're using weights, you can easily get sucked into thinking about your workout in terms of what number you hit last week and how you want to make that number higher this week. With a band you're much more free to focus on the sensation of the exercise, and seek out the hottest, deepest burn rather than an arbitrary combination of reps/kgs of weight. More freedom!

The worst thing that can possibly happen with a resistance band is your anchor point coming loose during an exercise (because it was improperly set up) and the band snapping back at you. This has happened to me and I'm not going to lie, it stings! I had a red welt on my stomach for a few days. That's the worst case.

With weights, things get much scarier, from broken toes and pinched fingers all the way to hyperextended joints, ripped tendons, and the possibly fatal outcomes that can happen when something like a benchpress goes wrong. If you're working out alone (and you will be if you're a serious Kenzai trainee getting it right every day), then the band will be as safe a training partner as you could ask for.

- When you've gained basic mastery over bodyweight based exercises.

- When you've learned the basic movements of the smaller exercises that bands let you do.

- When you understand what real food looks like and in what proportions to eat it. This is more important than anything else!

If you've met these requirements, then and only then will weights be a fruitful use of your time. And even at that point resistance tubes should remain a consistent part of your repertoire... there are just too many advantages to staying at band camp!