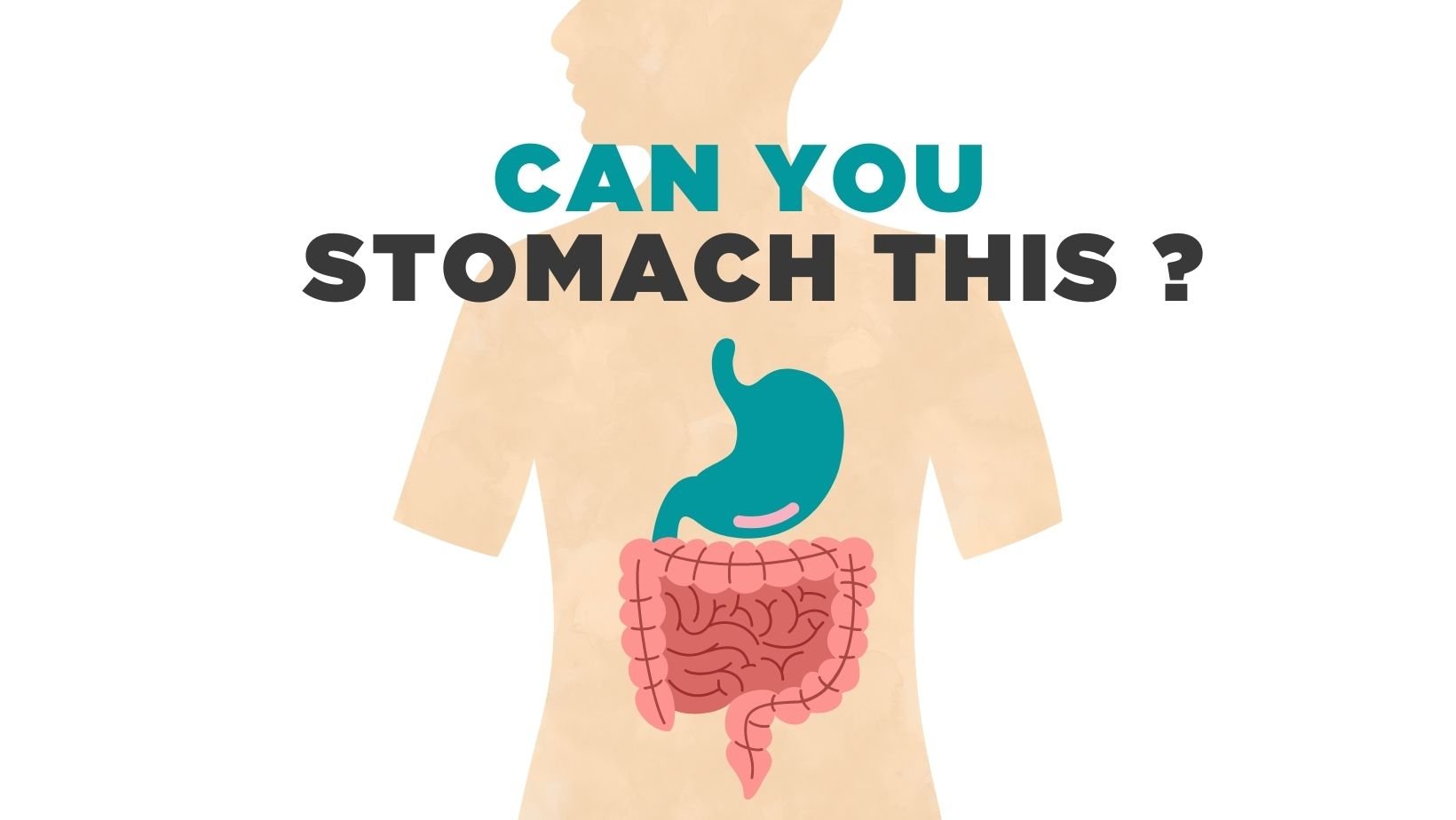 PULSE - Can You Stomach This?

Sometimes in wellness we dive so deeply into weeds of fitness (What type of squat gets the best results? What macronutrient ratio is right?) that we forget basic, fundamental things. Today we’ll dive into one of these basics — your stomach.

English is a wonderful language, but it has some very annoying blindspots. One that frequently frustrates me is the word “stomach.” A person can say, “I want my stomach to look better at the beach” or, “The doctor said there’s a problem with my stomach” and be referencing two completely different parts of the body. 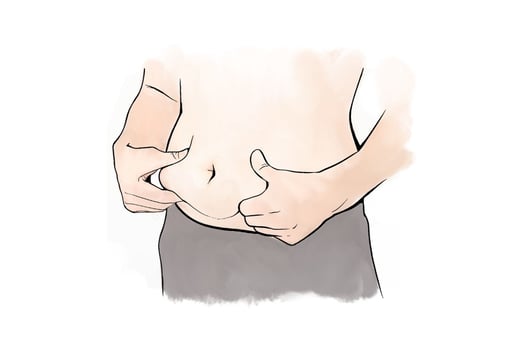 The doctor “stomach” is a 30x15 cm (12x6 inch) kidney shaped sack at the bottom of the esophagus, with a drainage valve to the intestinal tract.

These two parts of the body (the “tummy” and the stomach) have very little to do with each other in a direct sense. But people think there’s a connection simply due to the geography of the body. The stomach organ sits directly under the abdominal fat, and when your stomach is full of food matter, it pushes into the abdominal walls and makes you look and feel “fatter”. Couple this fact with the reality that overeating leads to more fat accumulation and people’s minds can get into a kind of shorthand thinking that when you’re overweight, your stomach organ must have gotten bigger, and that when you lose fat your stomach organ gets smaller. This gut feeling (ha!) seems to be confirmed by the experience that when you’re eating well, you gradually start to feel satisfied from smaller portions, and can’t physically tolerate an overly large meal anymore. This must be because your stomach shrank, right?

The intuition that your stomach can increase or decrease in its base size is wrong. Your stomach is just like a cloth eco-bag you might take to the grocery store. Sometimes the bag can be filled with stuff, and other times it can be empty, but the size of the bag doesn’t change.

What’s more, we see a remarkably consistent size of the stomach across all shapes and sizes of people. The adult stomach can hold about 1 liter of liquified food, and that volume seems to have some evolutionary advantage, because it’s roughly the same size for everyone. 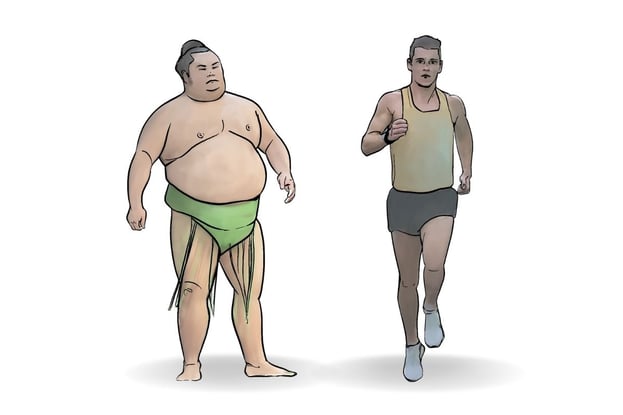 Believe it or not, these two men have the same size stomach organ.

If the stomach doesn’t change size, then what accounts for how, at different times in your life, you become acclimated to larger or smaller meals?

The brain is like a mob boss who has informants all over the body, who whisper in its ear about the current situation in different muscles and organs. For the stomach, the boss has two main informants, the vagus nerve and the hormone ghrelin. Let’s get to know them.

Your brain needs a steady stream of information from your stomach and intestines. To get it, it uses the vagus nerve, which has tendrils which reach from the base of the brain stem (the oldest, most reptilian part of your brain) and branches out to various checkpoints on the stomach and intestines. The vagus nerve does a LOT of other things but for today we’re concerned with its relation to the stomach.

We often skip over exactly how a nerve gets information to send to the brain. For example, when you hear something, what you’re “hearing” is the movement of thousands of microscopic hairs on your cochlea, which wave around and vibrate based on how sound enters the cochlea chamber. These little hairs are connected to nerves which send signals to your brain, which are decoded as sound. When the hairs move this way you hear a bird singing. When they move that way you hear a train passing. Hearing is hairy!

When it comes to the stomach, the vagus nerve gets its information from how stretched apart different nerve receptors are. Imagine if you put your fingers on  a balloon like you would when screwing on a lightbulb and closed your eyes. You could easily sense if someone was inflating or deflating the balloon based on how much tension you felt in your fingers. The vagus nerve works in a similar way. As the stomach and intestines expand with food matter, it keeps the brain updated on how much capacity is left. This is what tells you you’re starving or stuffed.

In tandem with the vagus nerve, the stomach produces a hormone called ghrelin. When certain conditions are met (low blood sugar, a stimulated vagus nerve), ghrelin is released by the stomach into the bloodstream. This hormone makes it to your brain, where it finds receptors in the pituitary gland and sends up a flare in your brain that you’re hungry. 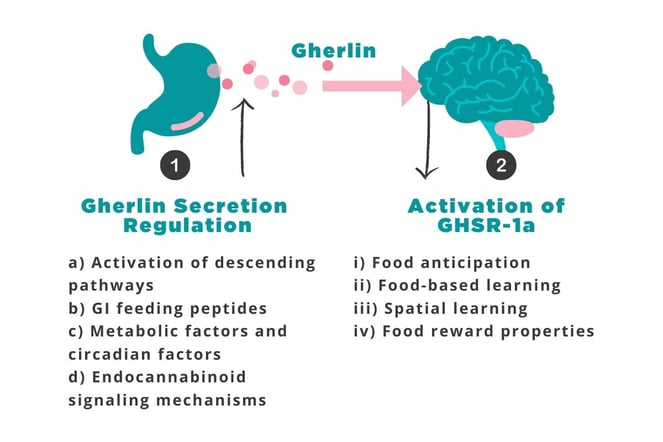 You can think of the vagus nerve as activating that “stomachy” hunger you get when your stomach is rumbling (a rolling muscle contraction called borborygmi), and ghrelin as activating your “brainy” hunger where you daydream about food, salivate, and lick your lips in anticipation.

Over the course of your life, your brain learns these patterns intimately, and will get into a pattern. Your brain says something like, “When X amount of vagus nerve is stimulated, and Y amount of ghrelin is present, I’ll drive my human to eat something.”

The interesting thing is that these variables have very little to do with how much energy you actually need to consume to survive and thrive. Your brain doesn’t have a way to accurately count calories, it just does its best to guesstimate based on how stretched out your stomach and intestines are. As we can see by rising obesity rates (42% of Americans are obese, and 32% of the UK), the brain often guesstimates wrong and overconsumes (especially in the context of calorically turbocharged processed junk foods and drinks).

When you get into a habit of overeating, your brain, vagus nerve, and ghrelin levels become miscalibrated. What feels like “full and satiated” is actually “stuffed and overfed.” This overfeeding introduces excess energy into the body, which it packs up for a rainy day in fat storage across your body (including on your belly, right above the source of the problem! Later, when you try to reduce portions, you feel unsatisfied and underfed, even though you’re eating plenty of calories to maintain your body mass.

However, if you can stick with better-sized portions for about a month, the brain will get with the program and recalibrate itself appropriately. For example, on the 1st of the month, your brain might have thought “When I sense the vagus nerves on the stomach are stretched by 8mm, I’ll turn off the ghrelin hormone and feel satisfied.” But after a month of eating smaller portions and not keeling over dead, the brain would say, “Ah, I see, it turns out that I can safely turn off the ghrelin when the stomach is stretched by only 4mm.” 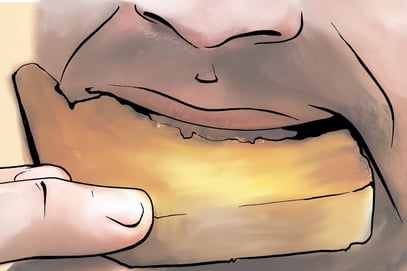 This is why, when you’ve been eating well with good portion control, you can’t stomach the idea of a large meal anymore, and what used to be your normal portion now makes you feel stuffed. Your stomach hasn’t changed size, your brain and vagus nerve have reset their gauges and have a new baseline of what feels full.

The opposite can happen too of course. If you go back to eating overly large portions, you’ll nudge up the vagus nerve calibration bit by bit. Satiation used to hit at 4mm expansion, but it becomes 5mm, 6mm and so on.

We make diet and nutrition complicated, but at the end of the day, it comes down to simple things, like how stretched out the digestive bag in your stomach is. With this background, how can we make better food choices that work with the vagus nerve and ghrelin system, not against it?

The role of a stretched out stomach for satiation is what makes fruit and vegetables such a powerful nutritional tool. Fruits and vegetables are always made up of 80-90% water. But your vagus nerve doesn’t know that what’s stretching out your stomach isn’t dense fats and sugars, but inert, zero-calorie water and fiber.

You can test this out yourself anytime. Eat an entire head of broccoli, 10 carrots, or 2 large apples back to back. These all come out to about 200 calories, but you will be absolutely stuffed, and finding the idea of eating more to be an unpleasant thought. Compare this to other more calorically dense foods like a single candy bar, a bag potato chips, a stick of beef jerky, or a soda (all about 200 calories each). After eating the processed foods, you’ll still feel like you could eat more (and many people do, which is why body fat rises year by year).

Eating fresh foods, especially fruit and vegetables, stretches the stomach and satisfies the brain without busting your caloric load.

When reducing portions, remember that hunger is a passing sensation that has little to do with your actual energy levels.

In the modern world we’ve developed an attitude that hunger is a sensation which must be immediately addressed. You now know that hunger isn’t really a very good barometer of how much you actually need food. It’s ok to feel hungry and not rush to fill the void. If you can sit with your hunger for a few minutes, you’ll find it often goes away, because it was just your miscalibrated vagus nerve talking to the brain.

If you switch to wholesome fruit and vegetable based snacks and meals, hunger is rarely an issue, but when you do feel the sensation, remember it’s just some nerves and hormones working through their functions, and not an emergency.

When in the recalibration phase, eat by mass, not by instinct.

There’s a movement called “intuitive eating” where the idea of tracking your food, dieting, and all the negative emotions around these things is rejected. These are all very good and noble aims, but what intuitive eating misses is that due to miscalibrated vagus nerves, people who are in a bad place with their food will have the wrong intuitions about how much to eat.

This fact is why, at Kenzai, when we’re working through a fat loss cycle, we measure out food in terms of mass. Instead of trying to guesstimate how many carbs you need, you just have a number, for example, 150 grams. Dole out your portion and enjoy. The amount of stomach stretching the vagus nerve perceives is inconsequential. When you tackle portions from a food-mass-first approach, you significantly aid the recalibration step of the brain and vagus nerve, and are soon able to know the right amount of food to meet your nutritional needs.

After the recalibration is complete, THEN a person can switch to the more intuitive eating approach and have good success.

Digestion is among the most complicated and nuanced biological processes of the body. But if you can remember that under all the physiology and biochemistry it’s just a matter of how stretched out your stomach is, you can start to make smarter choices about what and how much you consume.  If you’ve got your portions under control and are looking trim, great work! Keep doing what you’re doing.

And if you’re looking to lose some fat and eat better, rest easy knowing you’re just a few weeks away from more control, if you can eat fresh foods and hang tough through those first few weeks of vagus nerve recalibration. Now you know how it all really works!