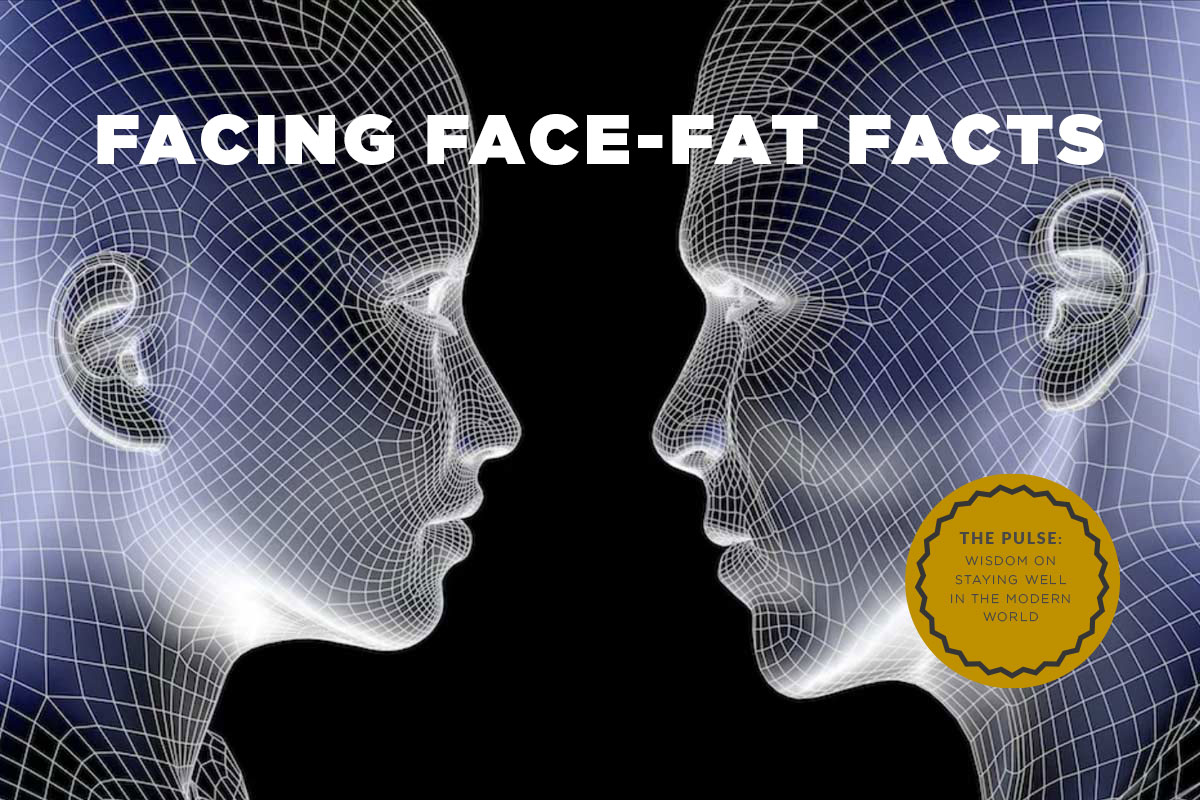 At your funeral, above your casket or urn of ashes, will there be a nicely framed photo of your shoulder blades? Or of your hamstrings? Of course not. People want to be reminded of YOU. They want to see a picture of YOU. And so there will be a picture of your face. More than any other part of your body, your face is your identity, your constant calling card as you move through the world.

We have a whole area of our brain (the fusiform gyrus) devoted to the task of recognizing faces. This is down deep in the temporal lobe where we process basic sensory information. This means dealing with faces is an old, primal part of being human. We're so keyed into recognizing faces that our brains can overdo it sometimes, seeing faces in everyday objects like buildings, clouds, and pieces of toast (a phenomenon called pareidolia).

When the fusiform area of the brain is damaged or underdeveloped, the face becomes a confusing mess of sensory data. This can lead to prosopagnosia, or "face blindness", where someone is utterly unable to remember faces. Brad Pitt and the neurologist Oliver Sacks are famous sufferers of this condition, and have spoken about how challenging and stressful it makes common social interactions.

All of this is to say that the way your face looks and the way it expresses itself are a huge part of the human experience, hardcoded into our brain architecture at the fundamental level.

I've heard all sorts of reasons for people wanting to get in shape. People say they want washboard abs, a toned booty, big biceps, or the elusive "thigh gap", but you never hear anyone say "I want a fitter face." This is strange to me.

No matter how great your abs are, only a small percentage of people you meet will ever see them.  But 100% of people will see your face, interact with your face, and remember your face as the main  physical component of you. This is even truer now in the digital age, when online interactions  make your face the only part of you people can see.

Let's explore how the face is constructed and how your body fat can screw things up.

Your skull provides the anchor points for more than 40 different facial muscles and ligaments. These are the muscles that animate your face through its extensive suite of expressions and feelings. Interspersed amongst these muscles are about two dozen fat storage compartments.

Like a well-prepared squirrel, your body loves to pack away fat in little hollows all throughout the body. Some of these storage zones, like the butt, tummy and love handles, can store a lot of fat. Others, like the fingers, knees, and face, host much thinner fat deposits.

As you gain fat through eating more calories than you expend, your body spreads adipose tissue in layers across all of your fat stores in proportion to the size of the fat pocket. You can think of the different fat storage areas around your body like warehouses of different sizes. When you have excess fat to distribute, the love handle warehouse says "we have space for 100 fat cells" while the cheek fat warehouse might say "we only have room for 10 fat cells." But those 10 fat cells in the face will be much more noticeable, because they're distributed amongst so many tiny muscles in an area quite close to the surface of your skull. An extra fat-percentage point on your stomach won't make much of a visual difference. On your face it will.

An extra fat-percentage point on your stomach won't make much of a visual difference. On your face it will.

Let's look at these facial fat compartments in detail. Talking about this kind of stuff can be sensitive, so I'm going to stick to using male actors for my examples. We're not looking to mock or shame anyone here, just understand what's going on with the body as it goes about its business of storing and depleting fat stores. As public figures, I think these actors can take the scrutiny. 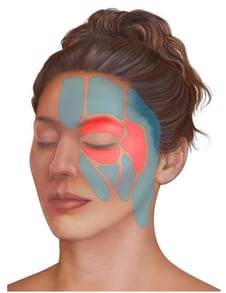 These fat pockets marked in red are the three fat zones placed around the orbital bone of the skull, and these are probably the most disruptive places to add fat on your entire body. When your face fattens up, you're plumping up the padding directly above and below your eye. As the fat stores get larger, they begin to crowd out the intricate folds of the upper and lower eye. This makes your eyes appear smaller and more crowded together. The fat pockets also block out a lot of light from hitting the eyeball, meaning your eyes will seem duller and less sparkly.

The eyes are the windows to the soul. Surrounding them with fatty deposits of unnecessary tissue is like putting up ugly, puffy curtains on those windows. We perceive narrow, obstructed eyes as signs of shiftiness and guilt. Large, open, inviting eyes are seen as innocent, trustworthy, and inviting. If you're plumping up your orbital fat stores, you're making life harder for yourself. When people can't see your eyes clearly, they're more likely to keep their guards up and keep their distance.

The nice thing about eyes is that they're all beautiful. From the darkest blacks to the bluest blues, the human eye is an intricate and lovely thing to behold. Obscuring them behind pillows of orbital fat is a real shame! 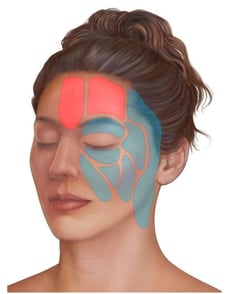 The two pockets of fat on your forehead are very thin, just a few millimeters, but when they're plumped out with fat they have the unfortunate side effect of reducing the visual height of the little ledge that's known as the supraorbital bridge. When you lose that little lift of the eyebrow ridge, your forehead appears larger and flatter. Your slab of forehead will dominate more of your face and make the other parts seem smaller in comparison. 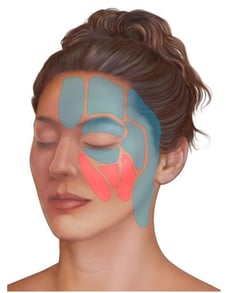 You can identify three distinct areas of fat in the cheek region. The one directly to the side of the nose is called the nasolabial compartment. You know that line that forms when you laugh or smile, running from the line of your nose to the edges of the lips? That's called the nasolabial fold, and it creates a kind of plateau around the lips.

When the nasolabial fat compartment plumps up, it greatly exaggerates this line. Instead of a smooth transition between cheeks and mouth you get an abrupt contour change which flatters neither body part.

The other two cheek fat zones sit directly on the zygomatic bone, the protuberance of the skull that forms the domed area we call cheekbones. When you fatten up these two areas, you lose the sharpness of the cheekbones, replacing them with two squishy rounded balls of tissue that stick straight out of your face.

When your cheek fat zones are plumped out, you lose a lot of the drama of the face. The sides of your nose, the line of your cheeks, and the plunge down to your lips are all interesting places for light and shadow to interplay. A fat face will be much more of a Mr. Potato Head situation, with smooth, uninterrupted swathes of

skin that sap the vivacity out of human expression. 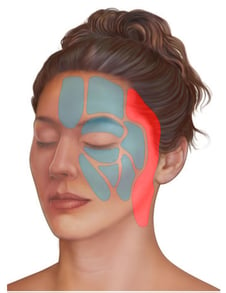 This is the long fat compartment that runs down the hairline to the jaw. This is a larger warehouse for the body to store fat, and as such you can see a lot more mass piled up here. When you fill out this pocket, you distort the silhouette of your entire head. Looking at the a person from the front, the whole head becomes wider, making the eyes, nose, and mouth appear smaller and "swimming" in the middle of the face. You see less of the ears. The jawline becomes rounder and fuzzier as the mandible is obscured under fat layers.

If fat continues to be added, the lower part of this compartment will start to droop out beyond the jaw. This is what a "jowl" is, and it's one of those things that adds ten years to your visual age. As we get older, our facial muscles lose their tone and parts start to droop. This is why older people develop jowls of loose tissue. By storing too much fat in your face, you're creating a jowl simply from the force of gravity pulling down your skin and muscles. People don't make much distinction between age-jowls and fat-jowls, so you look older and less healthy when you've got a jowly look going, no matter what your true age.

We've picked apart these different regions one by one, but of course if you're gaining fat you plump them all up simultaneously, meaning these negative visual effects will all pile up on each other. Here's three more examples of actors sporting varying levels of face fat. See if you can identify the main fat pockets and how they're changing the overall look of these faces.

The end result of carrying a lot of extra facial fat is a less engaging, interesting, and compelling face. When you pile fat on your skull bones and facial muscles, you're essentially blurring the unique layout of your bone structure in relation to your eyes, nose, lips, and chin. This relationship is what makes you look like you. It's what allows your friend to recognize you across a crowded room. Excess face fat smudges a very real part of your identity.

As bad as that is, there's more. Face fat adds a barrier between your facial muscles and the outside world. As humans we're capable of hundreds of expressions. But fat smooths out many of the fine details of these facial movements. Your laughs don't form the same deep grooves, your smiles don't show that same crinkle around the eyes, a "jaw-dropping" moment shows far less drop of the jaw. It's not that you're feeling any of these emotions less, you're just unable to express them on your face in the most complete way. We connect with each other through shared emotions. A fat face makes that more challenging than it should be. That, for me, is the worst part of it all.

If you're looking for a reason to get your fitness kickstarted, and rippling abs and a "beach body" don't do it for you, consider how much benefit you get from a low body-fat face. You'll appear younger, brighter, and more attractive. You'll find it easier to communicate with people. Your visage will hold the attention of your date across the table, or the room full of colleagues watching you make a presentation.

And the best part, your true face is already right there with you, waiting to express itself. A few months of solid nutrition and daily exercise are all you need to bring it out into the light.

Looking for more examples of fat-to-fit faces? Visit the Kenzai graduates page to see thousands of faces make the journey in front of your eyes. Kenzai alumni, have any good stories of how your face changed during your training? Share in the comments, I love to hear about your experiences!