On May 6th former NBA star Shaquille O'Neal was doing his usual guest spot on the basketball analysis show "Inside the NBA", when he tripped on some behind-the-desk wiring and fell face first off the stage. At 7'1" (2.12 meters) and 350 lbs (158kg) it was quite a thing to behold.

After the show, Shaq got on Twitter and laughed off the fall.

Then he took it a step further by offering $500 to the person who did the funniest photoshop of the tumble. 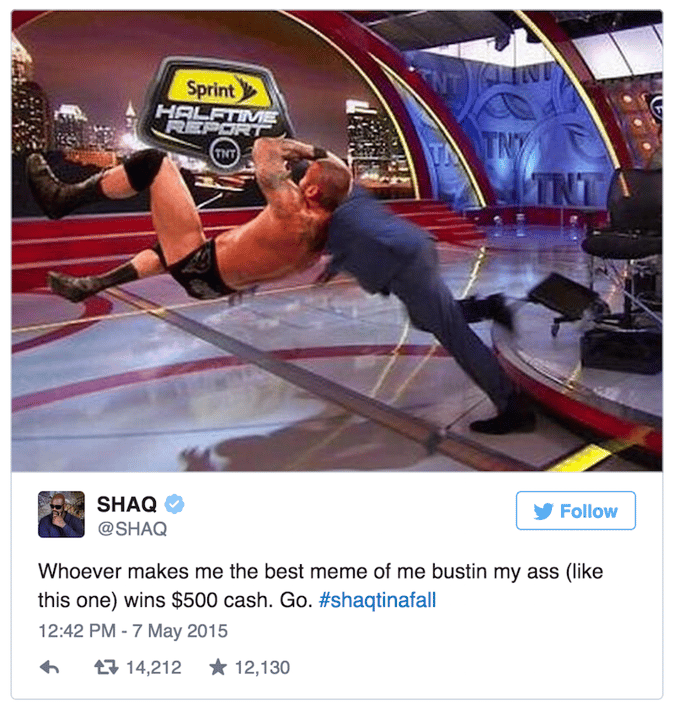 Which brought forth a torrent of #shaqfalls" memes like these: 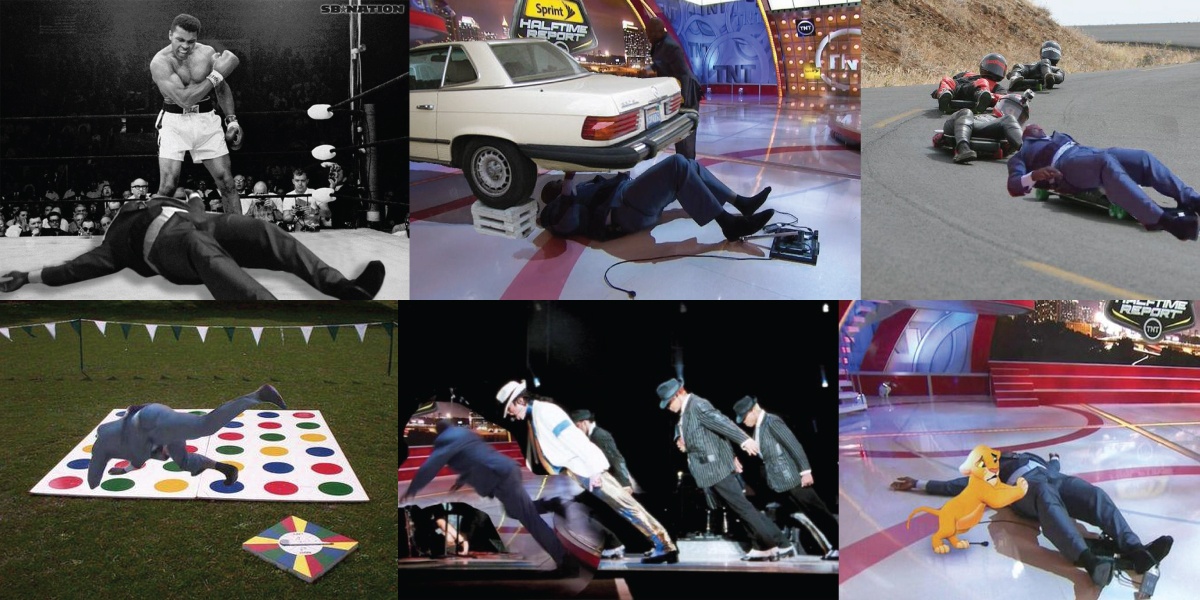 A few days later Shaq declared the winner was this Lilliputian homage: 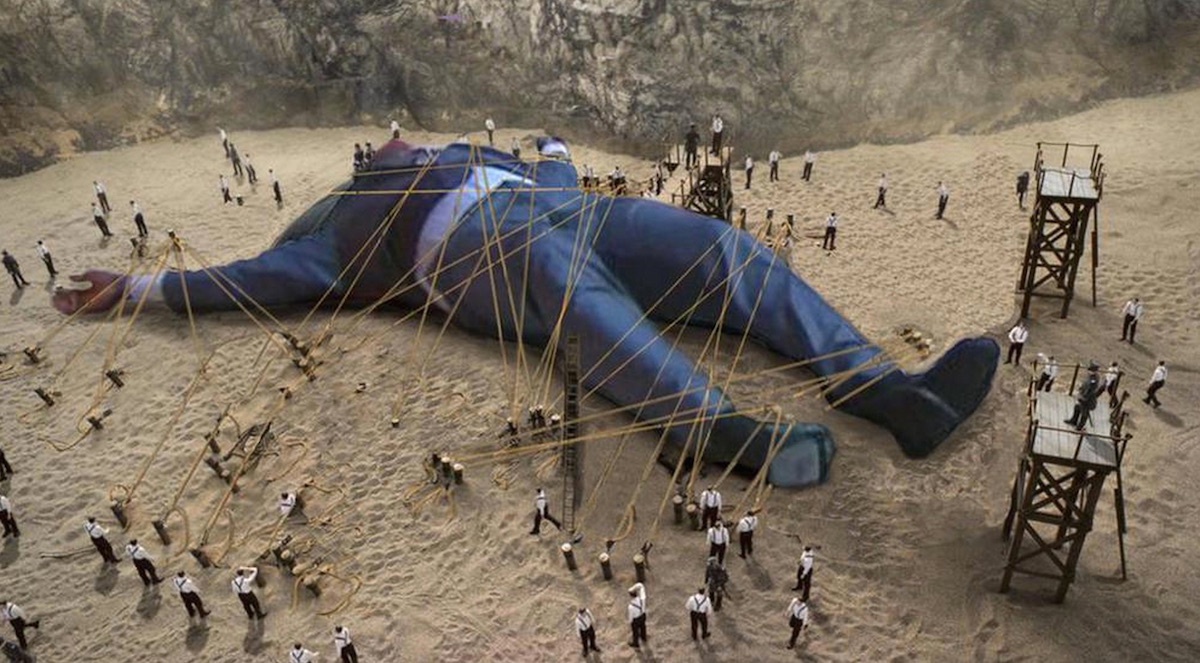 As I watched this unfold over the week, I kept thinking about another fall that happened earlier in the year. Coming home from a trip abroad, Zimbabwe president Robert Mugabe tripped on red carpeted stairs at the airport and took the last step hard, wobbling to his knees as his bodyguards tried to steady him.

Robert Mugabe is a horrible person. In the last 30 years he has moved from a democratically elected president to a North Korean style dictator for life. He has tortured and killed his opposition, sown hatred and racial divide, and knee-capped the Zimbabwe economy with corruption and graft. When I was in the Peace Corps we were advised to not even say his name when in Zimbabwe, that there could be serious ramifications for even talking about him in public, like a real-life Voldemort

Mugabe responded to his red carpet fall in the way only a power-mad dictator could. He ordered all photos and video of the stumble deleted. His Information Minister put out the following statement:

"Nobody has shown any evidence of the president having fallen down because that did not happen."

After it was clear the photos and video had leaked on the internet, the Information Minister clarified:

"The hump on which the president tripped was formed by two pieces of the carpet which apparently had not been laid out properly where they joined. And to be honest with you, even Jesus, let alone you, would have also tripped in that kind of situation."

In the weeks following the fall, a full investigation was launched, one insider saying "There are many departments that are being investigated, from Air Zimbabwe, the advance team and the security. I doubt if some of them will come back. The issue here is simple. The security team was caught napping."

In the end more than 30 people were fired or suspended over the fall. Such is life in Zimbabwe. Of course, that didn't stop the internet from responding with a flood of #mugabefalls memes:

So we have these two influential men who went through the embarrassment of falling in public. But the way they handled it made all the difference. Shaq's good humor through the week was remarkable. By laughing at himself he gave us permission to laugh with him. He left himself open to the inevitable jokes and memes that were coming, and by being a good sport he actually made the whole thing into a communal event, a internet-wide chuckle at the way the universe humbles us when we least expect it. He might have fallen down but he ended up on top, with more twitter followers, a better public image, and more love from his fans.

Mugabe's approach was a disaster. He showed what a petty, capricious, out-of-touch leader he really is. We collectively ridiculed this 90-year-old man who didn't even really fall down, just stumbled, because he refused that basic need we all have, to see that there's a real person behind the persona.

Of course there's a world of difference here. Shaq is a beloved star of the "Dream Team" golden era of the NBA, and Mugabe is ... well... an evil genocidal tyrant. Still, you can imagine how things could have turned out differently.

What if Shaq had lost his temper, screamed at the tv crew, and thrown around pieces of the set? It would have been a real "wow, so that's what he's really like" kind of moment.

And what if Mugabe had come up from his stumble laughing, patting his bodyguards on the back, and then gone back to help an old lady down the tricky part of the carpet? He'd still be a despicable war criminal, but you couldn't help but feel for a moment, "Huh, I guess he's human too." 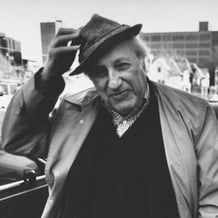 I heard an interview with the famous oral historian Studs Terkel once, and he was being asked how he got people to open up to him. He told a story about when he was a young man in Chicago and was taking a girl to an upscale restaurant. He didn't have any experience with fancy food, and he was afraid of making a fool of himself. So before the meal, he took the waiter aside and said "Look, I don't really know much about fine dining, but I'm really trying to impress this girl. Here's all the money I have, can you make it stretch as far as you can?"

It was a feast. The waiter brought out course after course, kept the wine flowing, and in the end gave them much more food and drink than his meager budget allowed.

Terkel explained the key to it all was showing his vulnerability to the waiter, approaching him one human being to another and letting his weakness to be seen. We're all weak inside, unsure of how to proceed, and making it up as we go along. Sharing that with another person opens the door for a real human connection.

I heard that interview when I was in my teens and it always stayed with me. I've found the lesson to be true time and time again in my own life.

When you confront people with a facade of bravado you get the same in return. It's like two people in elaborate masks doing a kabuki dance in front of each other, and wondering why they're not getting through to the other person. There's real power in being the person who stops, takes off the mask, and says "This thing is sweaty and uncomfortable and this dance is kind of silly. Want to go get a burrito?"

Nine times out of the ten, the other person will take of their own mask and say "Thank god, I thought you'd never ask." 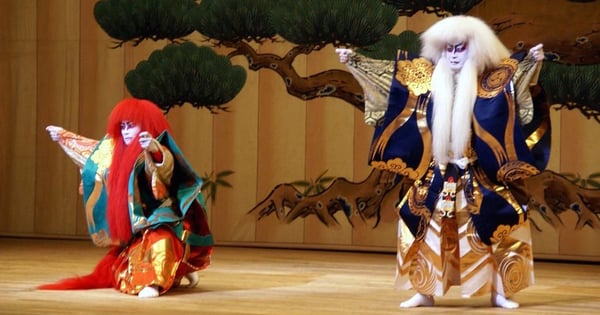 These are the forces at play with the two men's falls. Shaq's reaction makes us feel closer to him. Mugabe's pushes us away.

In our own lives, and especially when we're getting fit, there will be a lot of falling down. Every year with Kenzai we guide hundreds of people through the process of getting in top shape, and there will be thousands of missed workouts, diet slip-ups, and moments of weakness where the trainee falters. We encourage people to share everything, the good and the bad, and believe it or not, reading about a trainee's failures is always viewed as a good sign in the trainer HQ.

When someone screws up but shares what happened and how they got in the situation, they're taking ownership of the misstep, not just blaming the bodyguards and carpet. This makes falling down an opportunity to learn and connect. The training group circles around their fallen teammate, lifts them up, and knows they'll get the same kind treatment when their own mistakes happen. The impossible-to-fake human dynamic begins to develop, and that's a power that can move mountains. 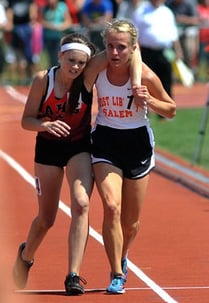 What's worrying is working with a trainee who never admits to anything going wrong, who only reports the good stuff and edits out the stumbles. This tells us that the person is dealing with a lot of internal issues. They're so attached to their mask that they can't seem to take it off, even in the safe space of their training group. These people always have lower success rates, often just evaporating into the night when the mistakes have piled up so high that they can't hide them anymore. Exposing your vulnerabilities is hard, but living under the constant pressure of maintaining a perfect facade is always harder.

It's a pretty sure bet that in the next few weeks you're going to screw something up. When that time comes, remember to be like Shaq. Be humble. Take responsibility. Let people know how and why it happened. Have a sense of humor. You can't erase the fall, but you can control your reaction to it. And a skillful response will transform pointing fingers into helping hands every time.