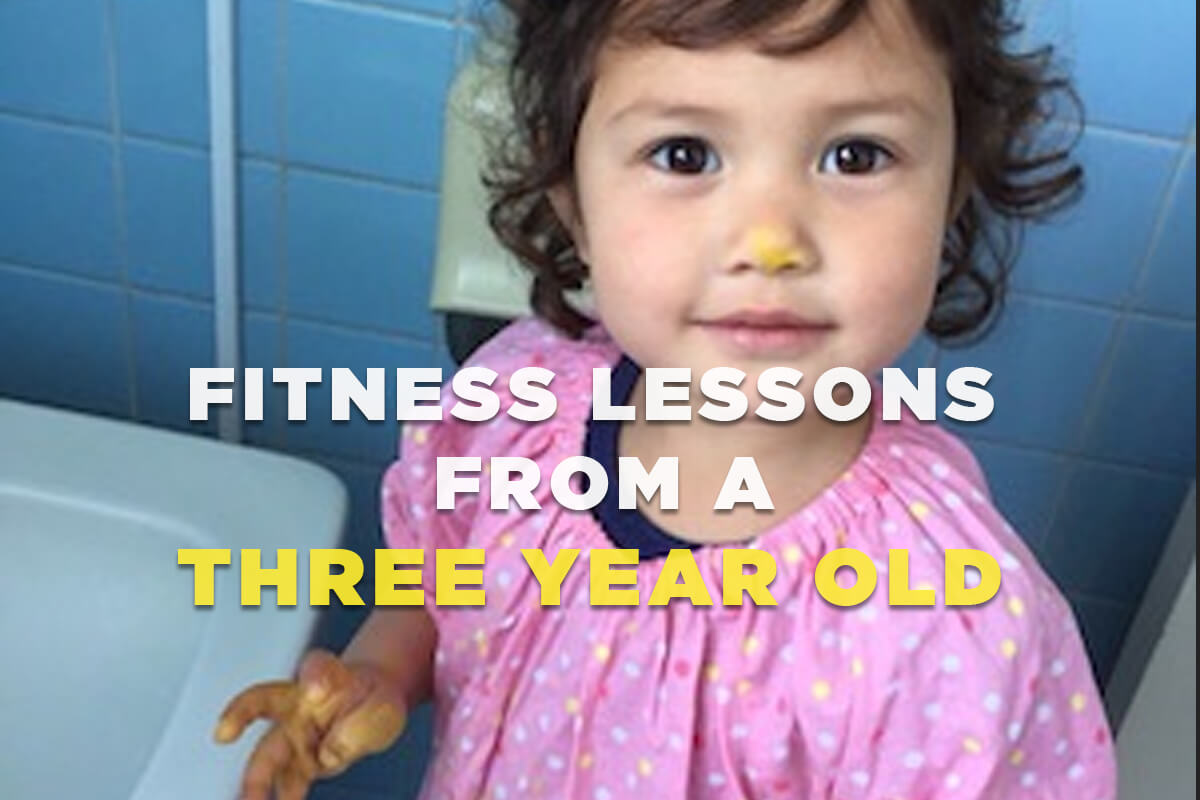 This is Juri. She's my kid. She's pretty cool. Here she is after some finger-painting at school.

learned about health and wellness from watching this little human get to grips with her body and the world it inhabits. In that piece I promised to share more observations as she grew.

On the blank canvas of a child's new life, our human tendencies, tics and foibles are painted in bold brushstrokes. As I watch Juri self-assemble her personality and preferences, I'm constantly learning about my own nature and the human condition in general. Here are three more lessons she's taught me in the past year.

The ego is a construct, and it only matters as much as you let it. 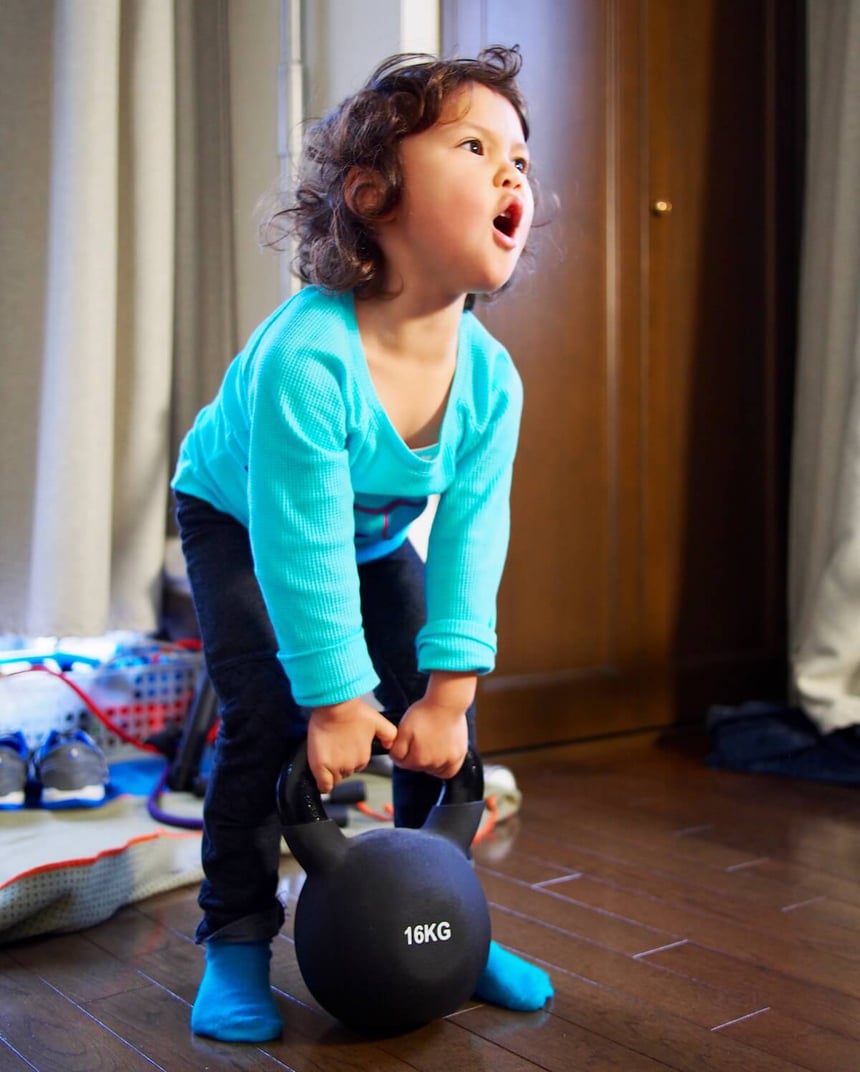 This is a photo of Juri trying to lift a 16kg (35lb) kettlebell that I keep in the office. Given that she only weighs about 13kg (28lb) she's having a bit of trouble. Every few weeks she comes back to the kettlebell and gives it another try. What's most interesting is that even as she tries to lift it, she's engaging the task without ego. She sees the weight, wonders if today is the day she'll be able to lift it, gives it her best shot, fails, then moves on as if nothing happened.

She doesn't get mad at herself. She doesn't curse and kick the weight. She doesn't make excuses or worry that anyone will think less of her for this failing. Lifting the kettlebell is simply something she can't do right now. When I ask her why she can't lift it she happily says "It's too heavy!"

Getting upset about it would make as much sense to her as getting upset that the sun rises. Her mind is able to walk that fine line where she accepts reality as it is, but doesn't let that stop her from giving it another try next week. She hasn't built up strong enough of an ego that it requires constant defense and appeasement.

When you're working on something that requires physical or intellectual growth, tamping down your ego is a critical skill. Vanity, pride, boastfulness and one-upmanship are all a huge drain on resources. They make you give up too quickly, go too hard and get injured, and generally sap the joy from self-improvement. It's only when your core drive is coming from a deeper place that you make real progress. Juri starts from that place by default now. The rest of us have to be mindful and find that better part of ourselves each day.

There are two sides to this coin however, which leads us to lesson two.

Sometimes we don't know what we know. 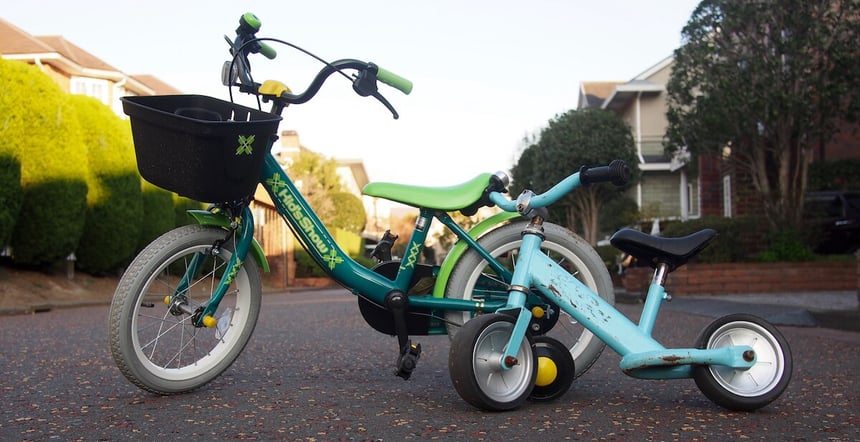 The small light blue bike you see on the right was a present Juri got on her 1st birthday. She rode it pretty much every sunny day from then till now. It's a push-bike that lets her put her feet down and kick off the ground for propulsion. 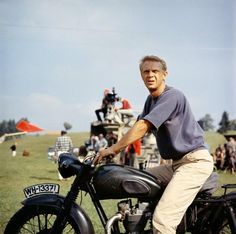 I'm not exaggerating when I say that she gained total mastery over that little bike. By the time she was two years old she could push and keep her feet off the ground for minutes at a time, finding ways to milk every little curb and slope for the smallest bit of gravity assist. She would terrify onlookers at the park, as this tiny, tiny child hurtled down huge hills standing up on the foot rests laughing manically. Right when you thought she was about to hurtle down a flight of stairs to her doom, she'd slam her feet onto the pavement and come to a skidding stop that ended with the bike facing sideways, like she was Steve McQueen or something.

The blue bike was getting pretty small, and seeing how much Juri enjoyed it, we thought she was ready for a real pedal bike. After all, she could balance, control her speed, and stop on a dime. The only thing left was adding some pedal power. So Juri picked out the green bike you see above, we removed the training wheels, and took it out for a spin.

For some reason, the new size and addition of pedals totally derailed the kid. She acted like she had never been on a bicycle before. She soldiered on for a few minutes, but quickly came to the conclusion that the green bike was "too big" and "too hard" for her. She was frustrated and wanted her old bike back. The second she got back on the little bike she was Steve McQueen again!

We couldn't get Juri to understand that she already knew how to ride the green bike. The underlying principles were exactly the same as the blue bike. She was just getting thrown off by appearances and the new twist of having pedals. After a week of trying, we put the training wheels back on and she plodded along down the street, one training wheel grinding along the whole time. Understandably, she now views the green bike as kind of lame, and leaves it unused most of the time.

I see this same phenomenon in adults, especially when they take on a new exercise routine. We ask them to do something for the first time, like a V-sit, and they're so thrown off by the newness of the movement that they forget they already know all the constituent parts. If you can do a Crunch and you can do a Leg-up, you can do a V-sit!

The knowledge is in your muscles and bones, you just have to trust yourself, pay attention to details, and persevere through the initial feelings of clumsiness.

I also encounter a lot of people who have completely bought into the story that they're uncoordinated and unathletic, usually from emotionally scarring sports experiences in high school. And yet I see them walking up stairs, opening doors, and lifting various sized objects with aplomb. Doing exercise is nothing more than using your arms, legs, and torso in similar ways to everyday life. You're just adding isolation and resistance. Believe it!

This lesson also applies to life in general. Sometimes people tell me they're not cut out to run a business. And yet they can balance a budget, plan a project, communicate their ideas, and influence people. There's nothing left to do but put their feet on the pedals and go for it. They don't know how much they know. Which leads me to my final lesson from a three year old.

Watching Juri make her way through her 3rd year of life, I've started to realize that you can't fake being a good parent. Your child is soaking up every choice you make, for better or for worse. Her opinions of herself, her world, and of you are informed by thousands of data points which you're throwing off throughout the day.

During a particularly busy time last year I was eating in front of my computer a lot. A few days later Juri wouldn't eat without her little toy computer in front of her. It was pretty humbling.

Every parent can tell you a story like this, of that moment they realized that it's not just being a good parent at storytime or the school play, but the monotonous daily grind of modeling good behaviors as best as you can. You've got a few precious years to be the steward of this little mind before it becomes autonomous. You don't always get it right, but you know of all the things in life this is the one you need to not screw up.

Besides a young child, there's another thing watching you all the time, at your best and worst. Your body.

Every day we make a hundred small choices about how to treat our physical form. Do we fill it with nutrients and wholesome foods? Or processed food products that satisfy our basest cravings? Do we bring our bodies back to homeostasis with exercise, breathing, and mindfulness? Or do we opt for a slurry of stimulants and depressants that swing us wildly between moods and emotions? We all know what the right choices are, just as we all know what good parenting looks like. But good intentions are worthless, it's our actions that leave the lasting impression.

"Good intentions are worthless, it's our actions that leave the lasting impression."

Every time you look in the mirror, you're seeing the culmination of thousands of health choices. You can try to paper over it with the best lighting and most flattering clothes, but the truth is still there. The body always watches, even at midnight when you sneak a few bites of ice-cream or bail on an exercise 2 sets early. Just as we try not to totally screw up our kids with destructive behaviors, we should try to not tear down our bodies with crappy food and exercise modalities. It can seem time-consuming and tedious, but that's the deal you sign up for when you have a kid or decide to live a healthy life. And no one who has done it right ever says they regret their choice.

Juri's nearing four now, she's talking up a storm and starting to realize that she's capable of changing her reality. The other day she was cracking herself up by singing the words to "Twinkle twinkle little star" wrong. These are her first steps towards the true joy of being a human being; creativity, subversion, and independent thought. I'll be sure to come back next year with more lessons that she's teaching me.

Until then, be good to your children, and to your body that carries the vital flame of your own childhood within it. Let's have a great year!