Getting Your Paradigm Right

The first New York City subway line opened in 1904. For more than 100 years subway cars have been rattling under the feet of New Yorkers. As subway technology advances, the city needs to phase out older models of subway cars. This leads to acres of abandoned, useless subway cars.

The photographer Stephen Mallon captured what happens next. The Metro Transit Authority takes these old subway cars, and stacks them on a barge.

The barge is tugged out a few dozen miles into the Atlantic ocean. Construction vehicles on the barge then push the subway cars into the water one by one. 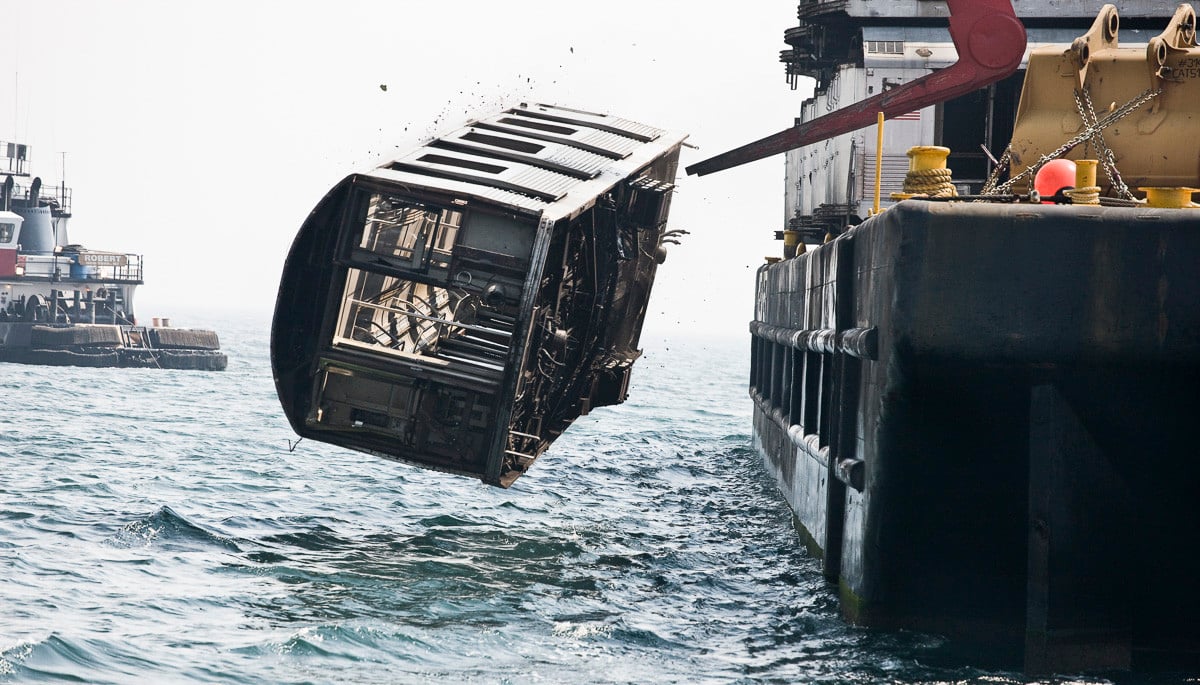 Hundreds at a time. Dumped right into the ocean.

How are you feeling now? Confused? Upset at the cavalier pollution of our seas? Why not recycle the cars? Why dump them in the damn ocean? What's the world coming to!?

The story isn't over yet. There's a method to this madness. It turns out that subway cars are uniquely suited to forming artificial reefs. In just a few months the undersea cars form the root structure for coral, quickly followed by the fish and sea life that take shelter in the reef. Here's how a subway car looks after 1 year under the sea.

And here's the progress made in 10 years. 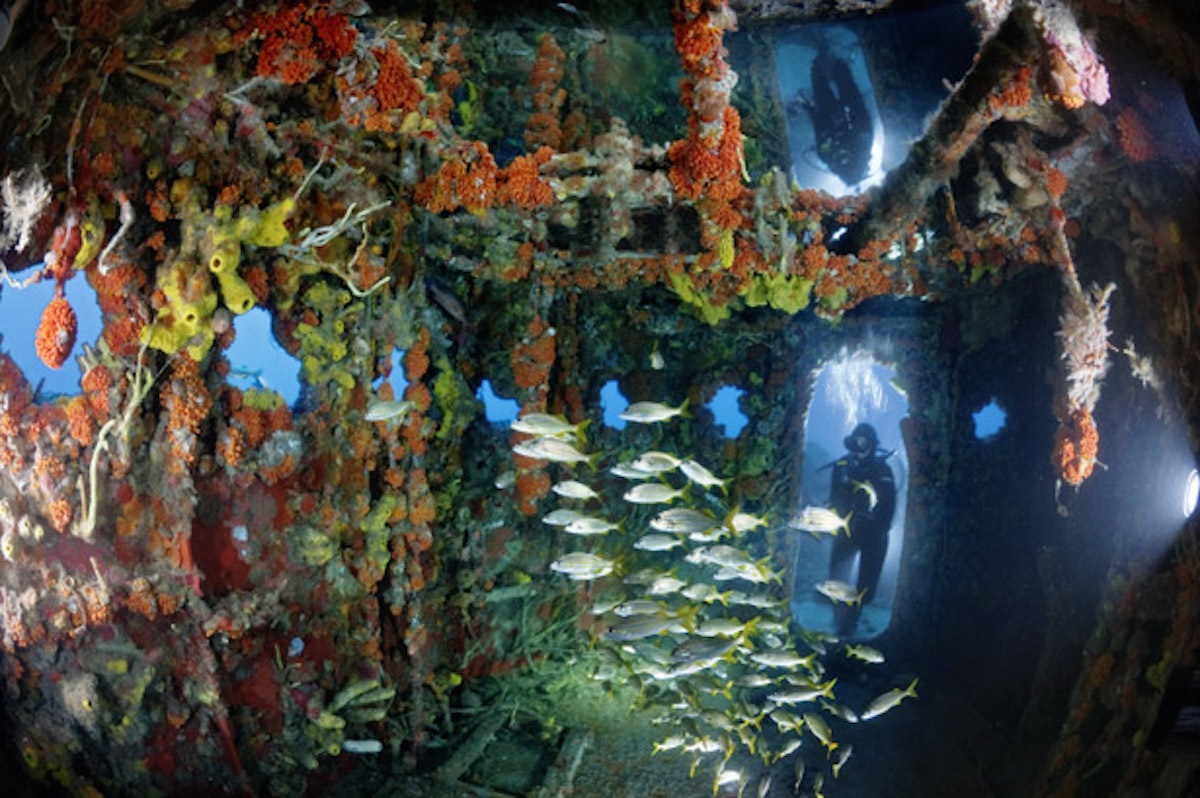 Wow! That's pretty cool! How are you feeling now? Pleasantly surprised to read some good news about the environment? Impressed by this clever use of our trash to bring some good to the world? This would make a great story to share at your next dinner party!

It turns out a lot of states are trying this. New Jersey also had a sunken subway program, but they suspended it after just a year. After dumping 100 subway cars into the ocean they  found that within a year almost all of them had fallen apart. This means that the reef is never formed, and worse, that big sheets of metal are now drifting around in the undersea currents, damaging commercial fishing gear and natural habitats alike. It seems that newer subway cars have weak points which fail in saltwater environments.

In fact the history of artificial reefs is pretty hit and miss. In 1972, off the coast of Florida 2,000,000 tires dumped into the ocean to provide marine habitat. The tires were bundled together with steel cable to give a nice coral starter substrate. Unfortunately these steel cables didn't last long in undersea conditions and most of tires came loose. They were swept around by the currents, washing up on beaches all over the east coast, and wedging themselves in actual coral reefs, devastating the marine life there. The US Military eventually got involved and to date has brought up about 100,000 of the 2,000,000 tires. Tire reefs around the world share the same stories of failure.

Now how are you feeling? Unlike the first two times I asked this question, you're probably somewhat conflicted. It turns out that creating artificial reefs seems to be a bigger, more complicated issue than you thought. There seem to be a lot of things to take into account on both sides. Ecosystems are dynamic and defy prediction. Maybe you're starting to wonder if it's conservation or cost cutting that's driving this dumping. Maybe you're feeling like you want to know more. Or maybe you're feeling like you've heard enough and this is something you should leave to the experts.

What you've just undergone is a series of paradigm shifts. The first context was "Pollution is bad." So you felt pretty negatively about subway cars in the ocean. The second context was "Creating new habitats is good!", and you got a subsequent positive feeling for the submerged cars. The last context was "There's a lot to think about here" and you're left with in an unsatisfying middle ground. The last paradigm is the one that's probably closest to the reality of the situation.

I bring this up because every day you deal with another complicated, interconnected ecosystem. Your body.

You're made up of around 400 muscles, 200 bones, 78 organs, and a breathtaking 100 TRILLION microbes. 100 trillion is a number so large we can't even grasp it, just know that of all the cells in your body, only 10% of them are "you". The other 90% are bacteria, viruses, and microorganisms. You are the coral reef that these microbes swim around all day long.

The human body is COMPLICATED. Spend just a few hours getting into anatomy or organic chemistry and you'll be left thinking, "I can't believe anybody is even alive." The amount of things that have to go right at the same time for you to be reading this sentence is mind-boggling. 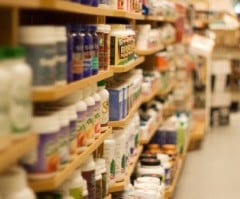 This is reality, but most people don't operate from this paradigm. They oversimplify. And this is why we get health fads.

This is why over the decades we've drifted between aerobics, circuit training, yoga, pilates, boot camps, crossfit, HIIT, spin classes, and a dozen other ways to exercise that promise better results faster.

All of these fads are based on the idea that a simple change to your diet or exercise can make you healthier and happier. But an ecosystem as complicated as your body will never dramatically change by tweaking just one variable. Just as ocean conservation is much more nuanced than dumping subway cars off a barge, maintaining your health requires more than a certain supplement or exercise system. You have to do a lot of things over a long period of time, and no one of them will be the silver bullet, it's the culmination of all of them working in concert.

Just as ocean conservation is much more nuanced than dumping subway cars off a barge, maintaining your health requires more than a certain supplement or exercise system.

When you're working from a simple paradigm (Pollution is bad! Vitamins are good!) you know where you stand, and you feel confident in the choices you make. You're also an easy target for snake-oil salesmen, and will waste time and resources on things that are only marginally helpful at best, and physically damaging at worst.

Being a mature and disciplined thinker means living with the discomfort of not knowing all the answers. It means listening to experts who spend their lives studying what you spent 15 minutes googling. It means being tough enough to call others on their bullshit, and admitting when you're proven wrong yourself.

So, with all that in mind, here is what we definitively know about staying fit and healthy.

• Eat a varied diet consisting mostly of fruit and vegetables. Proteins, fats, and sugars should be the smallest portions of your plate.

• Don't eat modern processed food, it's too calorically potent for your energy needs.

• Do moderate exercise throughout the week, consisting of both cardio elements (for heart and lung health) and strength training (for muscle and bone health).

That's it. Anyone telling you they have a secret method that shortcuts or bypasses these rules is either misinformed or lying. Don't fall for it, be comfortable living in the paradigm where there's no easy fix for complicated ecosystems. You'll save yourself a lot of hassle. Just ask the guys with 1,900,000 tires left to fish off the ocean floor!