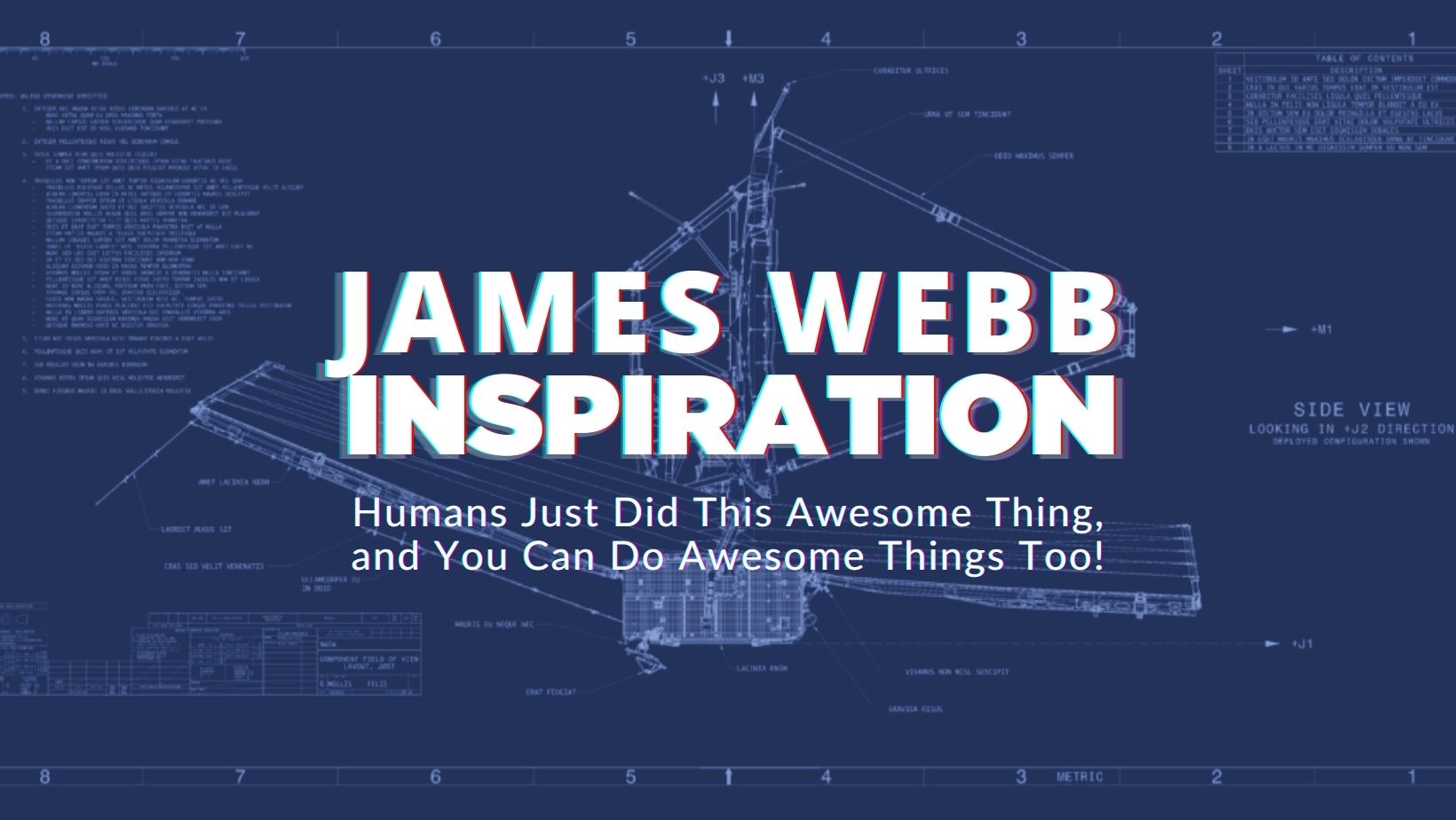 These days, it's easy to feel gloomy about the state of the world and humanity in general. The news can put you in a funk that makes you wonder if it's worth trying to change anything at all, much less your current physical condition. When the world seems to be on the decline, why not let it ride and decline right along with it?

Sometimes you just need one small, bright piece of progress to rally your enthusiasm and remind yourself that humans, including you, are still capable of amazing things. There's an amazing piece of new technology out in space which will inspire and rekindle your feelings that we can still get big things done. This is the James Webb Space Telescope (JWST) and it has done wonders for my positivity and faith in humanity. I want to share its journey so that it can inspire you too!

Why do we need this telescope?

Think about the sound of an ambulance siren as it approaches, passes, and zooms away from you.

The ambulance’s siren emits sound waves. As the vehicle approaches you, those sound waves pile up and are compacted into each other. This makes the pitch sound higher to your ear.

But when the ambulance passes and moves away from you, those sound waves are stretched out. Longer waves make the pitch sound lower to your ear.

The same thing is true for light waves. If a light source is moving towards you, the light waves are squeezed together. This makes them shift up towards the blue side of the spectrum, where the squiggles are tighter.

If a light source is moving away from you, the light waves are stretched out. This makes the light move towards the red end of the spectrum.

This is the Andromeda galaxy, our closest galactic neighbor at 2.5 million light years away.

When we look at this galaxy we see that its light is blue-shifted. This means it’s moving towards us. In 5 billion years in fact, the Milky Way and Andromeda will “collide” and create a new supergalaxy (in reality the space between stars is so vast that no two stars will actually collide). Neat!

You might think that when we looked around at the stars, nebulae, and distant galaxies in the sky, we’d see a general mix of blue-shifted and red-shifted objects as we all float around the “soup” of space. But that’s not how it looks at all.

To understand this, imagine a balloon with a dot pattern on it. When you inflate the balloon, every dot will become farther from every other dot, in every direction. In the same way space time is expanding, and taking stars and galaxies along for the ride.

But this isn’t the end of the surprises. The further an object is for us, the more red-shift we see. This means that not only are things moving away from us and each other, they’re accelerating as they go. There’s a mysterious force pushing galaxies apart faster and faster. We can’t see it, measure it, or detect it. This is why it’s called dark energy. What is dark energy? No one knows! And it makes up 74% of the universe. Pretty wild isn’t it?

This flying apart, red-shifted nature of the cosmos creates a problem. The stuff that scientists really want to get a good look at is the stuff that’s furthest away. That’s where we can learn about the beginnings of the universe and how galaxies, stars, planets, and even life is created. But these things are so deep in the infrared spectrum that to see them you’d need a huge telescope in an extremely dark, cold place. The wavelengths of these deep-red space objects is so subtle that even the heat radiating from the earth itself would drown out the image. You’d need to put the telescope in space, not just in orbit but far away from the reflected light of the earth and moon, and completely shielded from the light of the sun. You’d need the instruments to be cold, so cold that even the heat from an electric circuit would stay far away from the instruments. Anything less and you’d be blinded from the red-shifted light that tells the story of the universe.

The James Webb Space Telescope is humanity’s answer to this problem of seeing into the deep infrared. This project is over 30 years in the making. Those 30 years were spent solving an unimaginable number of thorny issues step by step.

Here’s just a small sample of the types of problems that had to be solved:

Problem: The telescope needs to be in an extremely dark and cold place.

Solution: Park it at Lagrange point 2, a gravitationally stable point three times farther away than the moon.

Problem: The telescope must be protected from solar light and heat.

Solution: Put a giant sunshield behind it.

An early design of the James Webb, with a single rigid sunshield.

Problem: The reflector dish needed to collect such long wavelengths of light has to be more than 6 meters (21 feet) wide, and constructing a precise mirror that big is impossible.

Solution: Make the reflector dish out of eighteen 1.8 meter (4.3 feet) interlocking hexagons. By the way this means the sunshield will need to be about the size of a tennis court.

Problem: What if, like Hubble, the mirrors aren’t in perfect alignment once in space?
Solution: Put independent multi-axis motors on each one, so that they can be focused once in place.

Problem: In the cold of space materials tend to shrink and deform. If this happens to the mirrors the data will be useless.

Solution: Make the mirrors out of Beryllium, which is pretty useless on earth but has the property of maintaining its structural integrity at very low temperatures. And while you’re at it coat the mirrors in gold which is a better reflector in the infrared range.

Problem: The sunshield will get too hot and mess up the delicate instruments.

Solution: Make the sunshield reflective and multi-layered, creating 4 gaps between each layer which can radiate heat away from the sensors.

Problem: All of this has to fit in a rocket no wider than a pickup truck.

Solution: Give the telescope an origami-like design, make the sunshield out of fabric, and unfold the whole thing remotely in space.

You can imagine that each of these solutions spun off thousands of problems of their own, which is why the James Webb Space Telescope took 30 years to complete, and ran way over budget. But as Jeff Goldblum said in Jurassic Park, “Those crazy bastards did it!” and on December 25th, 2021 the telescope launched into orbit, unfolded correctly, and is currently just days away from inserting itself into the Lagrange point where it will have enough fuel to do 20 years of uninterrupted deep space observation.

The world now waits for the secrets this telescope could reveal. Things like the conditions of the early universe, how the first galaxies formed, and even more exciting, the atmospheric conditions on exo-planets. If we find a planet like ours, with an atmosphere that can only be explained by the metabolic reactions of life, then the JWST will truly be the most important scientific device in history.

The wild card is that we might not even know what the JWST will reveal to us, because we never had the tools to look this deeply before. There may be things out there that we didn’t know that we didn’t know. That’s where scientific revolutions happen.

Whenever I see scientists pull off a successful, complex project like this, I feel a warm glow well up inside me. The past few years have been pretty gloomy, but things like space telescopes are a reminder that humans are complete and total badasses. Smart, industrious, ingenious, collaborative, problem-solving primates who, using just the gray matter in our skulls, can crack open the laws of the universe and see what’s inside. Go team human!

I find ambitious, cutting edge science invigorates my fitness life as well. This is because, like astronomy, health and fitness is at heart a science project. It’s just an energy equation that you need to get on the right side of. And any science project will work if you just follow a few simple rules:

Every incredible thing that science and technology has given us followed these rules. And they work for your fitness goals too.

These rules work for anything that’s based in the cold hard facts of the physical world, like astronomy, medicine, or physical wellness. That’s why I love fitness. When you get your inputs right, it works all the time, every time. In this sense, looking at distant stars or getting in shape is an easy and rewarding pursuit. Art? Politics? Psychology? That’s the really hard stuff.

I know when you’re struggling with your fitness and feel out of shape, it doesn’t seem easy at all. When those feelings arise, remember, right now there’s an origami kapton-shielded gold-plated beryllium space mirror floating way past the moon, taking pictures of the most distant objects in the galaxy, and WE did that. Humans are awesome, and you’re one of ‘em! If we did that, then YOU can launch your own success story, and best of all, you can start right now.