Every few years the "next big thing" hits the diet scene and suddenly everyone you know is making weird food choices because they've jumped on the bandwagon.

The Keto Diet craze is currently dominating cookbooks and weight-loss shelves. No doubt in a decade people will look back and say, "Remember when we were all doing Keto? Crazy times!" But right now we're in the zeitgeist, and you're probably wondering, "If so many people seem to be doing this, there must be something to it." Let's see if that's true.

We've been hammering on the place of the three macronutrients. Carbs for fuel, protein for raw materials, and fat for energy storage. But there's more to the story.

The fact that you're here to read this meant that your ancestors survived to produce offspring 125,000 generations in a row, without interruption. 99.8% of that time was without the aid of agriculture or organized civilization. This record of success is only possible because the human body has a lot of tricks up its sleeve when it comes to squeaking through times of food scarcity.

One of these tricks is being able to metabolize protein and fats into a carbohydrate. When needed, the body can break down muscle tissue or fat and through a long, inefficient process get a bit of glucose at the end. This method of energy production makes the body work hard for every bit of fuel.

As an analogy, imagine that you need to power an old steam train. The preferred method is to shovel coal into the furnace. The coal is easy to get, burns hot, and produces a lot of power. This is how carbs work in our bodies.

But what if there was no coal around, and you needed to keep the train moving? You'd look around for something else to burn. Maybe you could chop down some trees and break them into firewood. Maybe you could ask the passengers to give you their clothes and throw those in the furnace. All of these options would work, but you'd be getting less power out of these unorthodox materials, and doing a lot more work to get them. This is what it's like to try and power your body through proteins and fat alone.

The ability to keep running on protein and fat is an important survival feature, it's no doubt gotten many of your ancestors through a time of drought or a harsh winter.

Even in the context of a full, healthy diet your metabolism likes to dip into protein and fat storage for some percent of your energy needs. In a normal diet, roughly 20% of your energy comes from protein, and 10% from fat. This lets the body diversify its metabolic pathways and is the reason when you slim down you lose a proportional amount of muscle.

The Keto Diet turns this on its head. It strips your nutrition of nearly all carbs, forcing your body to use fat for 70% of its energy needs, protein for 25%, and carbs only the last 5%.

The body's method of converting fat to energy is called lipolysis, and the end result isn't glucose but a family of acidic molecules called ketones. (Ketones get their name from the german word Keton, an alteration of Aketon, meaning ‘acetone’.) The body can break apart ketones and kickstart the Kreb's cycle with them, giving you the energy to keep living off of fat alone.

When your body is deriving the majority of its energy from ketones, you're in a "ketogenic state" or "ketosis." A Keto diet seeks to keep you in ketosis all the time. This means your carb intake can't exceed 15-30 grams a day. To maintain this low level of carbs you have to avoid a long list of foods.

No beans or legumes.

This leaves the keto dieter with a choice of meat, eggs, or seafood, nuts, butter, high fat dairy (like soft cheeses), oil, and a limited list of vegetables to choose from. 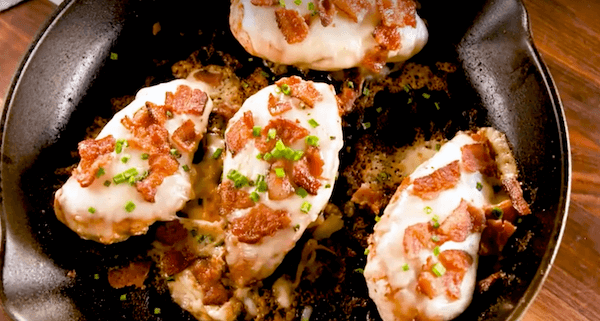 Butter fried chicken with cheese and bacon, the kind of meal that fits the keto menu, and no doubt a contributor to the fad's popularity.

With those intense, draconian food cuts, the Keto diet better have some powerful effects. In certain cases, it does! Since the times of the Greeks a low-grain diet was known to reduce the number of seizures in epileptics. Keto also has good evidence that it resets pre-diabetics' insulin resistance, giving them a chance of avoiding full-blown diabetes. Some rare types of cancer that thrive on glucose can be stopped in their tracks when starved of fuel with ketosis.

There are other niche uses. It appears to give deep sea Navy Seal divers more resistance to oxygen toxicity. And for extreme endurance athletes (working in the 100 km ultra-marathon level), ketosis allows them to carry much more fuel on their bodies (as fat) than a glucose based system.

What about for normal people looking to stay trim and healthy? For these people, keto's benefits fall flat.

The one thing about Keto that you can't deny is that it's a fun way to eat (at first). Large servings of butter, cream, and oils, with a side of meat at every meal leaves you satiated. How long the novelty holds is another story. But does it make you healthier?

If you start strictly eating a keto diet, you'll definitely have some quick weight loss. Most of this early weight loss comes from your liver's depleting glycogen stores. For every gram of glucose you lose, 4 grams of water go with it. In the first few days of keto, there will be 2-3kg of weight loss, mostly water.

The Ketogenic diet will result in lower blood pressure, lower blood sugar levels, and body fat reduction. But so would any nutrition plan that gets you eating correct portions that don't exceed your daily caloric expenditure.

To get these positive health effects with keto there's quite a lot of negative side-effects. Switching to full ketosis is extremely taxing for the body. Most people experience listlessness, fatigue, body aches, headaches, and a low-grade fever during the transition week.

Maintaining muscle mass on keto is very challenging, and most people see a loss of muscle that exceeds that of fat, resulting in an overall poorer body composition. Keto enthusiasts make big claims that their athletic performance improves, but every rigorous study shows that performance actually declines for a body in ketosis.

Long term ketosis shows some ominous signs for health. It's been shown to alter healthy hormone levels, especially in women. The long term stress associated with ketosis has been linked to kidney stones and kidney disease. The lack of fiber results in an altered gut biome and a higher risk of colon cancer. Constantly loading up the liver with fats results in fatty liver disease and potential liver scarring (cirrhosis).

For a healthy person there's no benefit to taking on all the negative side effects of keto for results which can be had just as easily with a balanced, glucose-based diet.

But the biggest drawback of the Keto diet is shared by all fad diets. It's incredibly disruptive to normal social eating. Each meal becomes a thing you have to strategize and work around. Most people can hang in for a few weeks, but inevitably a business trip or vacation will come up and force them into a situation where they have to come out of ketosis. Few make it back.

At Kenzai, our philosophy on food is that the diet you can happily stick to for years will always beat a diet which falls apart on your first weekend away from your own kitchen. The amount of stress, mental energy, and deprivation it takes to get on Keto is so extreme that the health benefits would have to be out of this world to merit the switch. They're not, and in the long term point to health damage.

This is probably why no culture on Earth has ever lived in a constant ketogenic state. Ketosis is best reserved as a temporary emergency ration in times of crisis. To put your body through that crisis for a few illusory kilos of weight loss is a raw deal!

What To Say To A Keto Enthusiast

Talking to others about fad diets is challenging. People treat their food choices almost as seriously as they treat their religious choices. Once they think they've found the light, they'll adopt an eating style as an element of who they are, and begin proselytising to whoever will listen.

Our advice is to not try and talk people out of fad diets, but to beat them with results. Kenzai trainees who have been put through the wringer by a series of fad diets are often shocked that yes, you can eat carbs, yes, you can eat a ton of fruit, and yes, potatoes are a proud, noble vegetable and not the enemy. You can say yes to all these things and still see significant body fat reduction, an increase in muscle mass, and huge energy boosts, not just for a few months of fad dieting, but year after year.

We guarantee the person who's totally into Keto now will have moved on to the next fad within a year. With a balanced diet you have the opportunity to get off that carousel of deprivation and start living well with real food!