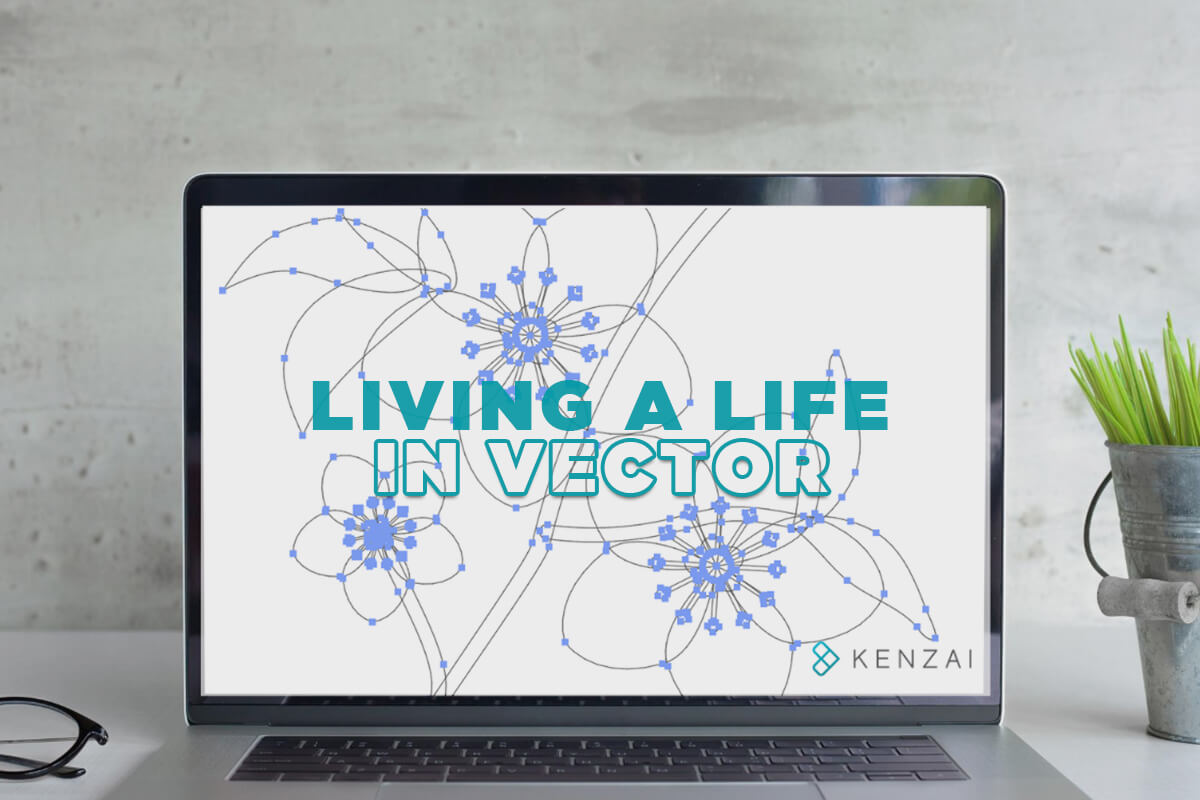 PULSE - Living a Life in Vector

Take a look at these two graphics. They pretty much look the same. If you really look closely, you might see the one one the left is perhaps a bit… fuzzier? A bit less vibrant? It’s hard to put your finger on…

These are terms you hear every day in graphic design, but not much in other fields. You can get an idea of what they mean by looking closely to see what’s really going on. Let’s start by zooming in on the edge of the left branch, the raster image.

When you get close, you see that this image is composed of small, square pixels. With smart changes of color and hue, these tiny squares fool your brain into thinking there are curves, shines, and shadows at play. In reality it’s just a lot of stacked up blocks. Images that are constructed of pixels like this are called raster graphics.

A French rastrum from the early 20th century.

When cathode ray television technology was being invented, the technicians described the horizontal sweep of the beam as a raster action. The name has stuck around and lives on today to describe how complex images are built up out of hundreds, thousands, or even millions of pixels.

Rasterized images make up nearly everything you see on a screen. The more pixels you add, the more sharp and clean the image becomes.

Now let’s look at the emoji on the right side, the “vector” image. If you had the right graphics program and zoomed in on the same spot as before, this is what you’d see.

You could keep zooming and zooming and never find a pixel, it would be just smooth, elegant lines and gradients all the way down. This image represents what it’s like to deal with vector graphics. (In reality, the image you see here is actually raster, because in order to get it on your screen it has to be taken out of vector to become readable for your browser.)

A vector is just the relationship between two points in space. You can describe this relationship with length (magnitude), angle, or curvature. For example, you could say that point A is 2 centimeters from point B, on a 43° line. Put a few points together and you have a shape. A triangle is three points that have vector relationships to each other. A square has 4. Add in some calculus and you can start introducing curves to the mix, creating things like the petals of the flower.

Here’s what this vector art looks like “naked”, when you strip away the color fills and gradients. 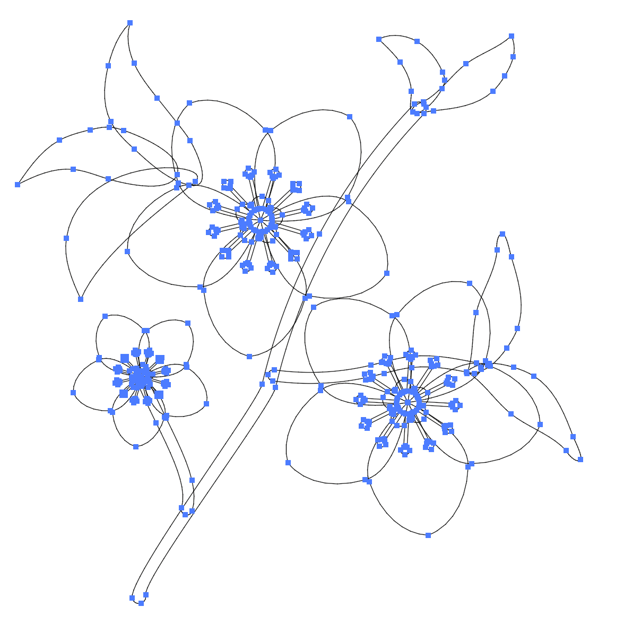 The blue squares represent the vector points, and their relationship to each other creates shapes. The branch and flowers are just shapes sitting on top of each other, the way you’d make a collage by cutting out and layering images from a magazine.

When a graphics program opens this file, it reads the relationship between the different points and draws the connecting lines. If you zoom in, it just redraws the lines again based on your closer perspective. This is why you can never get to a pixel. There are no pixels, just lines of math drawing and redrawing as you change your view.

The beauty of vector graphics is that the image is alive. Its lines and colors haven’t been set into the digital stone that is the pixel. You can work with the points, shapes, and color-fills on the fly. As an example, here are some modifications done to the branch with just a few clicks of a mouse in about 2 minutes, simply manipulating the relationship between the points.

If you tried to do something like this with a raster image, you’d be looking at hours of painstaking pixel work, erasing and adding blocks, zooming out to see how it looked, then zooming back in to keep plugging away in the pixel mines.

To sum up, a raster image is a brute force approach to making a graphic. Each pixel is “dumb”, it stays in its place and holds its color. A vector image is smarter. The points exist in the context of other points, and can be easily modified and iterated on.

Once you have this dichotomy in your head, you can start to see that it applies in all kinds of ways beyond digital art. It represents two ways to see, to learn, and to live.

Let’s get off the screen and move to pencil and paper. If you ask most people to draw a face, they’ll create something like this:

This drawing feels flat and somehow off. That’s because most people take on drawing with a raster approach. They think about a face and assemble the drawing piece by piece. They draw the eyes, the nose the mouth and usually finish with the shape of the head, in the same way a raster image stacks up pixel blocks to create the image.

If you ask someone who’s had some training to draw a face, you’ll notice they draw things in the opposite direction. You’ll often see them “blocking out” the figure with big shapes.

This doesn’t look so different from the first drawing. But this piece of art was done with a vector philosophy. The pieces of the face were assembled with knowledge about their relationship to each other.

This pays off when you ask the person to draw the face looking off to the side. All the artist needs to do is rotate the egg and its lines, and then add the eyes, nose and mouth in the correct place again. This will immediately look better than the raster approach, which can’t handle manipulating facial features in 3D space. Once you know the vector points of the face, any angle becomes possible.

Learning to draw like this isn’t intuitive, and takes practice to get right. But once a person knows the basics, the possibilities are endless. Drawing with a vector mindset will create many years of happy drawing. Sticking to raster will make drawing stale, and likely to be abandoned because “I’m no good at it.”

Now let’s move beyond visual art altogether. The raster/vector split exists in anything that you can learn to do.

When you’re first learning an instrument, you have a raster mindset. Your main concern is putting the right finger in the right spot at the right time. But as you gain knowledge of music you start to see the vector lines connect. What used to simply be your fingers in a certain position now becomes a D minor chord. And if you add these notes it becomes an D minor diminished 7th. And that tends to sound really good with C major 7th. When you see not just notes but relationships between notes, you’re really jamming.

If you’re making a bench, you can follow the process step by step with a Youtube video and make something pretty good. But a carpenter who understands the vector-like relationships between wood, nails, and load-bearing structures will make a better bench, and be able to make it in any size or design they like.

In literature, a person can follow an online writing guide, telling them how to set up characters, plots, and story arcs. But a great author has a vector understanding of how all these elements interact, and can play with them in unexpected and delightful ways.

This also applies to your health and wellness. For example, a raster approach to your nutrition is to do something like following a set meal plan. On Monday you eat chicken and broccoli, on Tuesday it’s salmon and asparagus, and so on. A more vector approach is to understand that each day you need the right amount of protein, nutrients, and fiber. You could accomplish that with chicken and broccoli, salmon and asparagus, or any other combination that strikes your fancy.

Your exercise works the same way. You can follow a rigid plan which has your exercises and cardio timed down to the minute. Or you can know the principles beneath the exercise, and start finding creative and fulfilling ways to move your body.

When we design training programs at Kenzai, we always have an eye on not just taking a client through the motions, but teaching them the hidden connections between food, exercise, sleep, physiology, and mental health. Raster fitness is a fad diet or 2 week health kick. Vector fitness is a new lifestyle and sustainable results.

Whenever you start something new, it’s natural to take a raster approach. It’s a good way to make immediate progress and gives you familiarity with the topic from the pixel level. But what often happens is that a person gets stuck in raster. You become the world’s greatest paint-by-number artist, constantly in need of a guide, unable to chart new ground. This leads to plateaus that can last for decades.

Raster is comfortable. It’s easy. Vector takes work, and hardest of all, trust in yourself and your abilities. But a life in vector is rich, rewarding, and far more interesting than spending your days filling in pixels.

How can you live a more vectored life?

Learning elements of design will make you better at dressing yourself. Harmonious proportion applies just as much to your body as to a building.

Learning music theory will make you better at color theory. They’re both based on the ways waves interact.

Learning to swim well will make you a better runner. They’re both sports that deal primarily with oxygen management.

Finding these connections is what makes life worth living. It’s the joy of learning there’s a hidden world behind everything you see and do.

Start looking at the world with this raster/vector paradigm. You’ll be amazed how applicable it is, and how dissatisfying a raster approach becomes once you have a name for it. Don’t resign yourself to a low-res, pixelated life. Switch to vector and thrive in vivid high-definition!