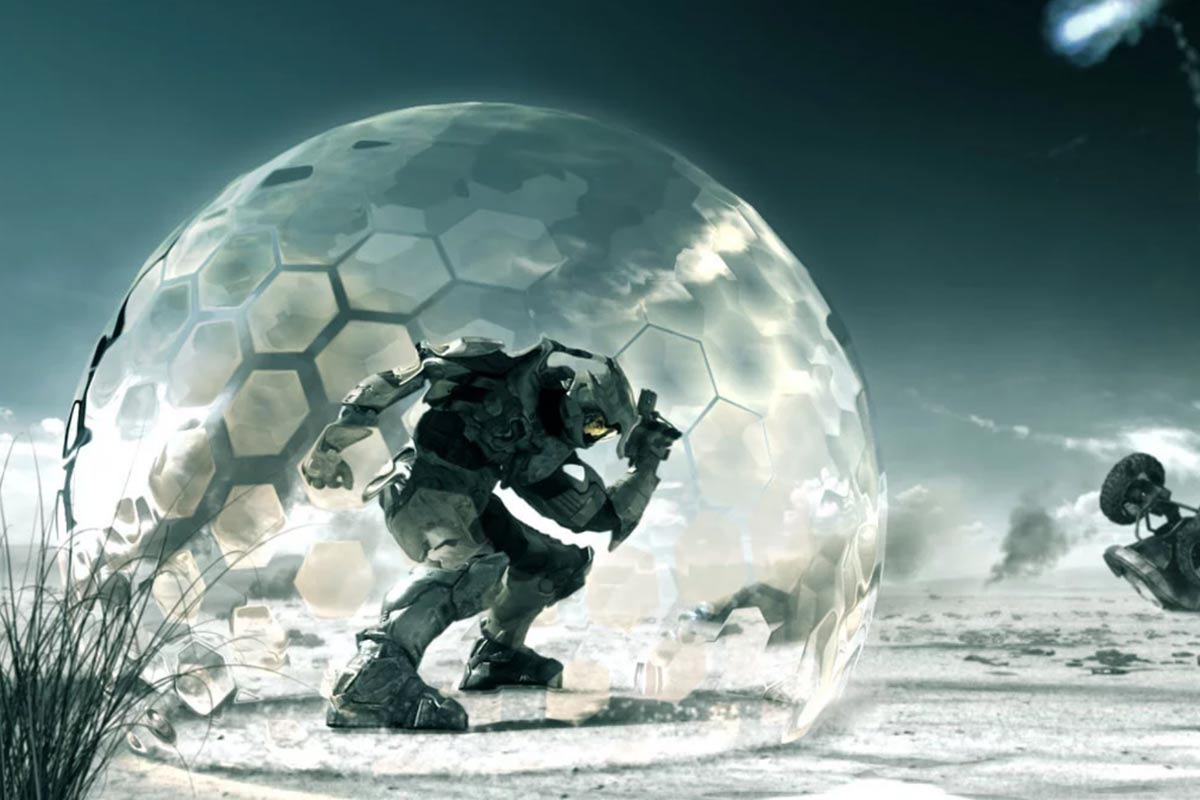 There's been a lot of Halo playing going on recently. Microsoft released The Master Chief Collection which has Halo 1, 2, 3, 4 and a preview of 5! That's 14 years of Halo! You can shoot aliens all day and night for weeks at a time with that package.

One of the things that made Halo such a hit is the concept of the recharging shield. Before Halo, most shooters just gave you a life bar. You took a hit, your life bar went down, and it wouldn't go up unless you found a health pack or a piece of meat or whatever it was that replenished the bar.

But in Halo, your character has an always-on energy shield. When someone shoots you, your shield power goes down a bit. If you keep taking hits the shield eventually fails, and you start taking real damage to your health. However, the shield is also constantly recharging. So you can take a few hits, get to safety, and let it recharge before entering the fray once more.

The inclusion of the energy-shield made Halo a lot of fun to play. It's also the single best metaphor I've found to explain how willpower works.

We used to think of willpower mostly as a matter of character. Some people just had more mettle than others, and they used their superior willpower to get further in life. If you were working on an issue such as losing fat, staying true to your spouse, or getting through a big project, your willpower (or lack thereof) directly reflected what kind of person you were. Winners had superior willpower. Losers lacked it.

This is a simplistic view of the world, and doesn't really stand up to close scrutiny. No one is an all-star in the willpower department. The politician who leads a nation turns out to be a philanderer. The well-disciplined pro athlete struggles with anger issues. The powerful CEO can't say no to a cheeseburger. Scratch the surface of any successful person and you'll find an area of their life where their willpower is failing them.

Our understanding of willpower has progressed a lot in the last 20 years. Through a series of very cool studies, behavioral researchers have zeroed in on the two core properties of willpower:

Scratch the surface of any successful person and you'll find an area of their life where their willpower is failing them.

1. Willpower is a limited resource that gets depleted over the course of a day.

2. Every difficult choice you made reduces your willpower stockpile, no matter what kind of choice it is.

For example, in the groundbreaking Baumeister study, people were asked to sit in a room with freshly baked cookies and raw radishes. One group could eat the cookies freely. The other group was told to not touch the cookies, but instead eat the radishes. After sitting in the room, both groups worked on a puzzle which was, unbeknownst to them, unsolvable. The subjects who had been forced to resist the cookies gave up on the puzzle in half the time of the cookie-eaters. Saying no to the cookies had depleted their willpower reserves, leaving them with less persistence to apply to the puzzle. Resisting a cookie and solving a puzzle seem like completely different tasks, but they draw on the same willpower stockpile. And that stockpile is finite.

Explaining this is complicated, which is why I love bringing out the Halo style energy-shield metaphor.

When you wake up, your willpower shield is fully charged. You're ready to take on the day. But as you go through the morning you start taking enemy fire from all directions. You'd like a mid-morning scone but you're watching your waistline so you choose a banana instead. You'd like to put off responding to an awkward email but you power through and write it anyway. You'd like to zone out during a meeting but you knuckle down and force yourself to pay attention. Each of these choices reduces your shield power, but you're still in the game.

After lunch you'd like to take a nap but you make progress on a project instead. You'd like to put on some headphones and just listen to music but you take a difficult phone call that no one else wants to handle. It's now mid-afternoon and your willpower shield is at critical levels. You planned to do a workout but suddenly, you just don't have the drive to do it. Some people invite you out for drinks, and you have no more defenses, you agree to "just one." Three drinks later you decide to go out for dinner despite the refrigerator full of fresh vegetables waiting for you at home. Your willpower shield is completely gone now, and your health bar is taking direct damage. Boom!

You get home, collapse on the sofa, veg-out for a few hours before going to bed, where your shield can recharge for the next day. A few months like this and you'll start to feel fat, run-down, and fed-up with yourself.

None of this has to do with your character. None of the poor choices you made has to do with you being a good or bad person. If a soldier (Halo or otherwise) runs right into the middle of the battlefield they get mowed down every time. If you want to get the most out of your daily willpower shield charge, you have to start playing smart. You have to use your shield tactically.

And that's exactly what we're going to learn to do next lesson. Until then, explore the truth of this metaphor in your daily life. Notice when you're feeling full of willpower and when you're depleted. Look back and see what happened that day to put you in that state. Let go of feelings that you're a weak-willed person. This is not a character flaw, this is what it means to be human. But you're not stuck. Read next week's lesson for some simple techniques that will get you to the next level.