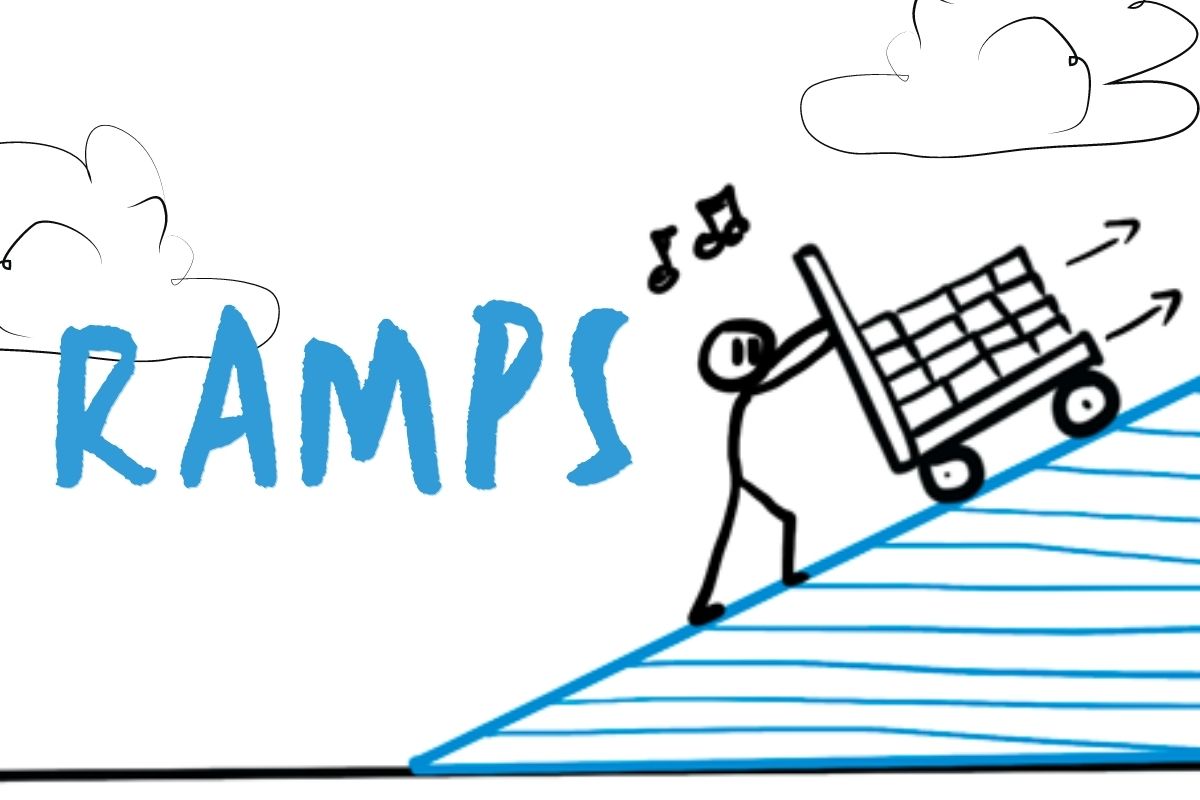 Every day, around the world, millions of people vow to start exercising and getting in shape. Of that group, research suggests 3 out 4 people will abandon the fitness attempt after the first 3 weeks.

There are a lot of reasons for this high failure rate, but one of the biggest issues is improper “ramping” into higher levels of exercise. Fortunately this is also the easiest thing to fix.

How to Properly Ramp Up for a Fitness Effort (and be that 1 in 4 who actually makes it!)

At Kenzai, we use a lot of analogies and metaphors when explaining wellness concepts, but for ramping, there’s no need to look far. Just think of an actual ramp!

Imagine someone has asked you to move a cart of bricks up to a loading bay in a warehouse.

Let’s analyze this situation in terms of the physics involved.

To get the cart up to the next level will require a certain amount of energy. (For example, if there were 200kg of bricks it would take 6000 joules of energy to lift the cart 3 meters into the air, working against the downward pull of gravity).

In the same way, if you want, for example, lose 5kg and increase muscle tone, you’re also going to have to put in a certain amount of energy. 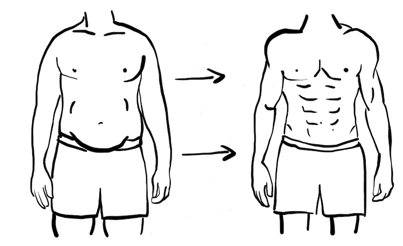 This is just as much an energy equation as the cart and bricks.

The numbers aren’t super precise, but to lose 5kg of fat you’d need “work” equal to roughly 150,000 joules of energy. This is the amount of energy stored in the 5kg of body fat, which needs to be broken up, used, and through that use shifted off your body and back into the environment where it came from (predominantly through exhaled carbon dioxide).

So, we have these two analogous situations. Move the bricks and move the fat. They both require you to put some energy into the system.

This is a pure vertical lift. You’re not only going against gravity, you’re taking the fight directly to it, moving in the hardest direction (straight up). The advantage of this is that you have very little distance to move, just 3 meters, and can do the job quickly. The disadvantage is that all the energy to move the bricks is compressed INTO those 3 meters and few seconds of lifting. This makes the job nearly impossible, and quite dangerous.

The vertical lift is the equivalent of diving directly into an intense, hardcore program far above your ability level, or going on a highly restrictive fasting or juice diet. You want results fast, and think you’re ready for the Herculean amounts of effort it will take.

The results are predictable. The mind might be willing but the body isn’t ready, and you quickly buckle under the strain, often taking on an injury in the process.

Seeing that the vertical lift is a bad idea, you think, “Why don’t I make a ramp?” Good idea!

Ramps take the required energy needed to do the job, and spread it out over distance and time. Instead of having to commit everything to one huge lift, you get the task done with smaller units of energy over a longer period.

But you’d still like to get this task done quickly, so you create an ambitiously steep ramp.

When it comes to fitness, a ramp of any kind is much better than none at all. But a ramp that’s too steep still sets you up for failure. Think about how you would feel pushing that heavy cart of bricks up a steep ramp. The first few steps you’d be ok. You’re fresh and full of energy. But in a short amount of time you’d start to falter. There’s simply too much weight trying to push you back down the ramp. You quickly lose momentum and are in a battle to keep things under control.

One missed step and the steepness begins to work against you. You lose your footing, which only causes the cart to gain momentum, you lose more ground, and soon enough you’re not only back to square one, the cart might have run over you and ended up further from the starting point!

In fitness, this is analogous to diving into an overly tough diet or program, hanging in for a week or two, but quickly slipping as fatigue, mental wear-and-tear, soreness, or outright injury overwhelm you This is often followed by a few weeks of poor eating and exercise, leaving your progress further than when you started, just like the cart that’s rolled away.

Ok, so you’ve learned your lesson. You can’t go straight up, and you can’t use a ramp that’s too steep. You’re tired of getting crushed by the task, so you decide to play it safe. You’re going to make the longest, shallowest ramp you can.

This takes the work of lifting the cart and spreads it over a very long distance. The advantage of this is that at no point do you have a particularly heavy load to move. The disadvantage is that it takes quite a long time to get up the ramp. In fact, it might take so long that you soon realize the time it takes isn’t worth the time it’s taking.

This situation is similar to fitness plans with a goal which is too unambitious and too far away. For example, if you need to lose 6kg (~12 pounds), it’s tempting to say, “Hmm, if I just lost .5kg (1 pound) a month, I’d be at my goal by this time next year, and it would hardly be painful at all!

This is a good idea in theory, but people who try this have as little success as those whose ramp is too steep. The problem is that when progress comes at such a slow pace, it’s challenging to keep focused. When you’re riding low and slow, it’s easy to tell yourself, “Why not take it easy this week… after all, I can make it up anytime.”

An overly-long ramp denies you the burst of enthusiasm that comes from seeing that you’re making progress. Those moments of noticing progress are like booster rockets getting you to the next level!

All of this means that of course, the smartest way to complete your task is with a ramp that’s not too steep, and not too shallow.

This ramp is the best of all worlds. It’s not so steep that you face getting crushed when you miss a step, but it’s not so long that you lose interest with slow progress. This ramp isn’t easy. You’ll need to put the work in. But you’re rewarded with steady, measurable progress that keeps you engaged, and most importantly, gets the job done.

For a fitness effort, the right ramp will have you starting with exercise and diet changes which are easily attainable. Each week, you gently increase the amount and intensity of exercise, but never so much that you’re lying on the floor feeling crushed, or requiring days to recover. For nutrition, a good ramp will have you slowly phasing out unhelpful foods while layering clean, wholesome replacements.

Not sure what the right ramp looks and feels like? Here’s a quick rundown of what to watch for. How you know you’re on the right ramp to get results.

Just as you don’t want to get home with your car on “E”, you don’t want to finish exercise feeling like you’ve given every ounce of effort. It might make your ego feel good at the time, but that over-exertion will ultimately cost you as you have to rest, recover, and deal with the mental burnout associated with pushing to the limit. Going to your limit also makes injuries more likely.

The right zone will have you feeling like “I worked hard, but I could have done more.” Ironically, that means you did just enough! This goes for cardio, weight training, or bodyweight exercises.

If your nutrition plan is so strict that it’s like a medieval penance (aka a hairshirt diet), then the ramp is too steep and you WILL get squished. Even those rare people who do push through a full month of intensely strict diet pay for it with ongoing food issues like binge eating and orthorexia. If a diet takes all of your self control day after day, your mind is simply running too hot and you’ll feel the effects in one way or another.

A correctly ramped diet will resonate with what your body actually likes. You may think you like fried chicken, beer, and brownies, but if you listen to your body you know that, actually, those foods bring as much pain as pleasure. When you’re eating a diet of clean, minimally processed foods in the right proportion you feel energized and alive. Eating right isn’t a chore but a treat.

You can’t get there overnight, but you CAN get there if you’re ramping into it correctly. Start by removing the worst offenders and keep cleaning up your meals day by day. Within 2 weeks you can be eating well without feeling deprived or miserable.

In the fitness world there’s a lot of talk about guts and grit. There’s a place for that, especially at the elite levels. But for someone just looking to get in shape to look and feel better, there’s no virtue in taking an adversarial approach that requires “manning up”, “fighting through”, gutting it out”. Take the opposite approach. Think of your exercise and nutrition not as enemies to be slayed but fairy godparents that are looking out for you. Each day you get to wake up, put a positive effort towards improving your choices, and then feeling the immediate good effects of those choices. The feeling is warm and caring, not cold and harsh.

If your ramp-up is at the correct angle, you won’t have to retreat to the primal “slay the enemy” mindset. Instead you’ll be more in the mode of growing a garden, doing the required work but knowing that things will happen at their own pace.

If you’ve tried and failed to find success with fitness, think about what part of your ramp was too steep, too shallow, or not there at all. The right ramp makes all the difference!