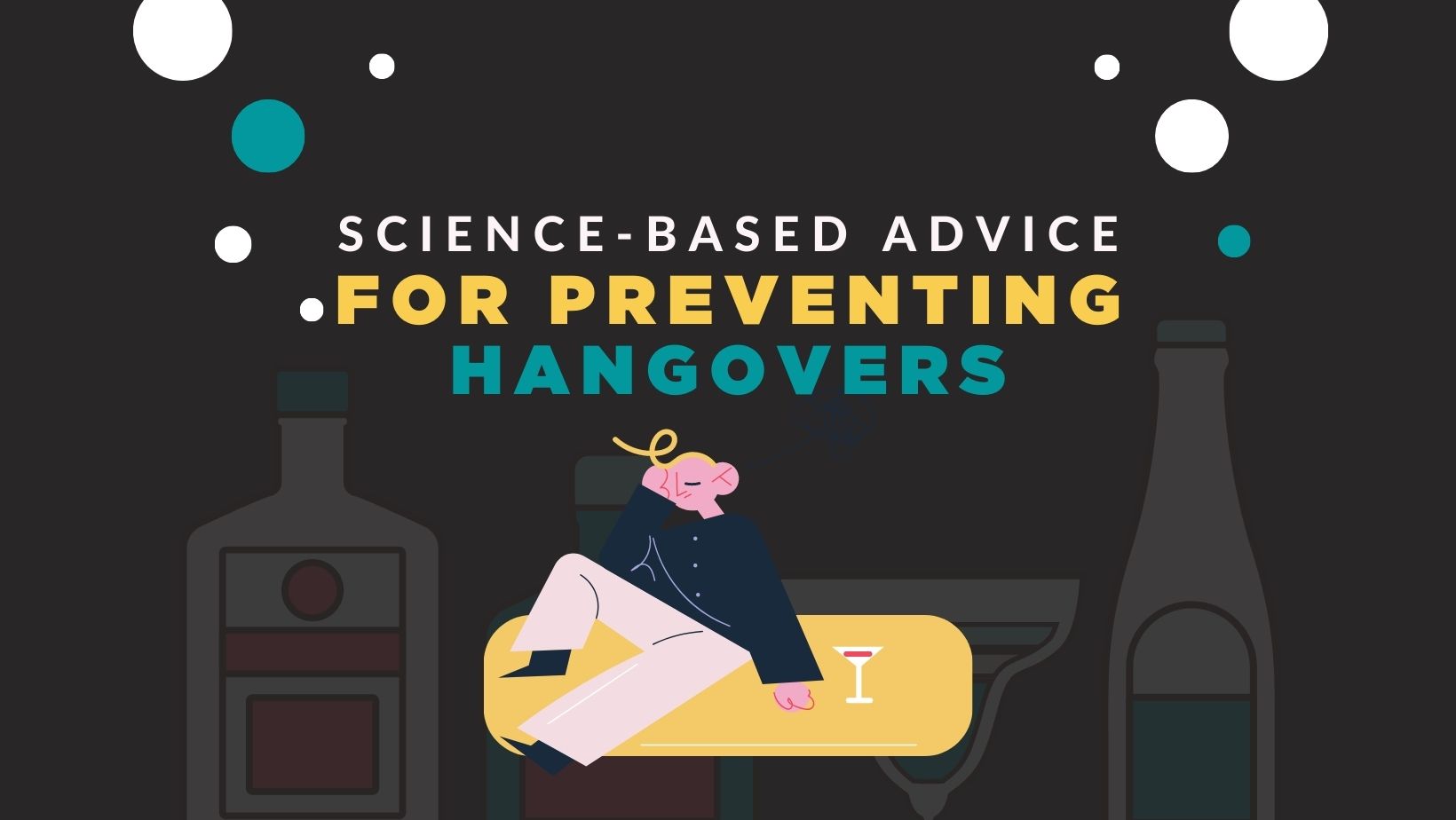 It’s said that when you drink too much, you’re cashing in tomorrow’s happiness and spending it all on tonight. When you have a hangover that statement rings painfully true.

When someone is in a Kenzai training program, we strongly advise against big nights out drinking, because it’s a triple threat to your fitness progress.

This is why we avoid alcohol when training, not for any puritanical reason, but because it has so many downsides when you’re trying to get in shape. 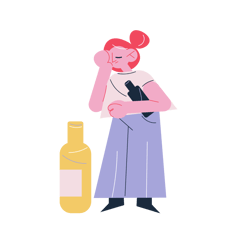 The caloric load of the alcohol and food you ate on your boozy night are water under the bridge. It’s best to just move on and not try to “make up for it” with extreme food or exercise efforts. But is there anything you can do about the hangover that can ruin the entire next day? Is there a way to win some of that time back and feel less lousy? Your friends and the internet are full of homespun tricks and hangover remedies, but most are urban myths that don’t really work.

A lot of real research has been done into hangovers, and we’ve collected it here in four science-based-tips to make your hangover less intense and prolonged. These tips can’t be done the day after (too late!) but are best practices you can use during your drinking to make the day after less of a nightmare.

When you drink, you introduce ethanol into your liver, bloodstream, and brain. From there, a cocktail of enzymes are secreted that work to break down the ethanol. Anytime a chemical is broken down in the body, it doesn’t go straight to its constituent atoms, it goes through several molecular steps, getting simpler each time. 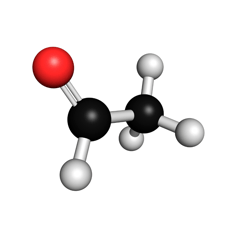 Unfortunately, the first step of ethanol breakdown is the nasty compound known as acetaldehyde. This chemical is a type-1 carcinogen that’s commonly used in industrial plastics manufacturing. It can make people sick if present in the air or groundwater. When you drink, your liver produces it right in the comfort of your own body.

A little acetaldehyde isn’t a big deal, in fact it’s produced not just from booze but from many fermented foods and fruits. But when you drink alcohol, you soak the liver in high amounts of liquid ethanol, which quickly piles up into unmetabolized acetaldehyde, which is 10 to 30 times more toxic than ethanol itself. The body is usually able to clear acetaldehyde before anything bad happens, but when you’re putting drink after drink down the hatch, your body simply runs out of the necessary metabolizing enzymes and acetaldehyde starts to accumulate in the liver, intestines, and brain.

In the body, acetaldehyde is like a bull in a china shop, it damages cells, interferes with normal organ function, and irritates the tissues it comes in contact with. Even after the acetaldehyde is finally broken down into mild acetate a few hours later, the damage persists and takes hours to recover from.

No matter what kind of alcohol you drink, your body will convert it to acetaldehyde as part of the metabolic process. The harder and faster you put the ethanol in your body, the more of an acetaldehyde logjam you’ll create, and the greater the pain and damage the next day. This leads us to tip #1.

If you’re going to drink, try to choose beverages with lower percentages of alcohol and spread them out as much as possible. Slamming back to back hard liquors will make acetaldehyde pile up in your body, which is the leading source of hangover misery.

All booze will cause acetaldehyde production, but some alcohols come with trace amounts of other byproducts of the fermentation process, collectively called congeners. Darker drinks like brandy, rum, and red wine have a lot of these extra chemicals, which give the drinks their flavor. Congeners can be various alcohols, acids, esters, and ketones, depending on the type of sugar and yeast present in fermentation.

The problem with congeners is that, like acetaldehyde, they break down into some pretty nasty byproducts. The worst congener of them all is methanol, a highly toxic cousin of ethanol, which becomes formaldehyde when metabolized. As you can imagine, trace formaldehyde floating around your liver, guts, and brain leads to some serious cell damage and hangover pain. 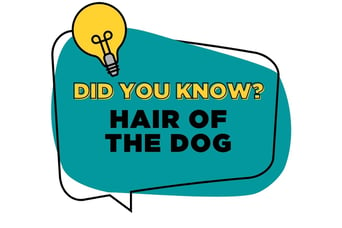 Having some “hair of the dog that bit you” (drinking more in the morning) is a famous hangover remedy. The reason it probably worked in the past is that less sanitary alcohol production meant more toxic methanol in the mix. In the liver, enzymes deconstruct ethanol before methanol. Therefore, if a hangover sufferer were feeling the effects of methanol metabolism (formaldehyde), and they added fresh ethanol to the liver, (the hair of the dog) the liver would stop breaking down methanol and switch back to ethanol. This gave the liver time to clear pure methanol before it turned into formaldehyde. Unfortunately, modern spirits have so little methanol that this solution isn’t relevant in the modern world.

This leads us to our second tip.

To avoid the worst of the worst hangovers, avoid darker drinks with strong flavors. Generally speaking, more expensive, high quality drinks have better purity and filtration, with fewer congeners than cheap or homemade beverages. It’s not your imagination, the good stuff really does lead to a lighter hangover.

Ethanol is a diuretic, meaning that it makes you urinate more than if you drank the same amount of water. However, if you’re drinking ethanol as a small percentage of a watery beverage like beer or wine, the water in the beverage will outweigh the diuretic effect. The more concentrated the alcohol is, such as in tequila, rum, or vodka, the more likely you are to become dehydrated.

But no matter what booze you’re drinking, you’ll be doing your next-day-self a huge favor by interspersing your drinks with tall glasses of water. Not only does this keep you well hydrated, it creates the all-important time delay between drinks that gives your liver a fighting chance to clear acetaldehyde and formaldehyde before they wreak havoc. It takes about an hour and a half for the liver to completely clear one serving of alcohol. Water can serve as the padding that creates the time the liver needs to do its job.

And don’t forget to finish your night with a big glass of water before going to sleep. This gives your body one more water input to work with as it spends the night shift clearing your body of toxins.

The more water you can include in your night of drinking, the better chance you’re giving your body to metabolize toxins quickly and efficiently enough to not get hit too hard the next day. This has a limit though, no amount of water will be able to stave off a hangover after a night of hard drinking high alcohol percentage liquors.

We keep talking about ethanol soaking into the liver, but how does it get to the liver in the first place? Unlike most food nutrients, ethanol is able to enter the blood directly from the lining of the stomach, where it’s dumped straight into the liver.

This means that the state of your stomach is directly related to how much alcohol enters your system, and how fast it piles up in the liver. If you start drinking on an empty stomach, there’s nothing between the alcohol and your stomach lining, and ethanol uptake will happen quite fast. However, if you’ve got some food in your stomach before you start drinking, you create a physical barrier that slows down alcohol absorption. 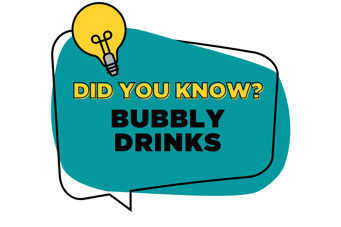 Bubbly spirits like champagne and spritzers are famous for giving killer hangovers. The reason is that the bubbles interact with the stomach lining, and literally force open the micro ridges (rugae) of the tissue. This gives the alcohol in bubbly drinks an express pathway to your liver, leading to more ethanol byproduct and stronger hangovers

Conventional wisdom says that eating a lot of carbs helps soak up the alcohol. But this imagines that you have something like an intact piece of bread sitting in the stomach, waiting to act like a sponge for your drinks. In reality carbs are quickly broken down into a liquid slurry in the stomach, and don’t offer as much protection of the stomach lining as you might imagine. A better option is food high in protein, fat, and fiber. These foods, when broken down, have a true stomach coating effect, and significantly delay alcohol absorption.

If you know you’ll be drinking, try to “pre-game” with foods high in protein, fat and fiber. This could be a portion of fatty protein (fish, pork, eggs) or dairy such as yogurt or cheese. Fresh fruit with its high fiber is also a good choice. A big serving of carbs is less helpful than you think. And remember that all these foods have a caloric impact which will have to be dealt with eventually!

These are the four most important things you can do to reduce the severity and length of a hangover. You can also see from these tips an outline of what the worst possible set of choices you could make. That would be something like going out on an empty stomach and rapidly taking shots of a strong, cheap, or bubbly alcohol, with no food or water in between. Above all else avoid the hangover-hell that this will produce!

The Reality of Drinking

Drinking is an odd thing. If we were to describe any other substance which dehydrated you, overwhelmed your liver, and filled your body with acetaldehyde and formaldehyde, you would call it a poison. That’s the reality of alcohol. It’s an experience of voluntary self-poisoning in the pursuit of a few hours of heightened dopamine release. Not only do you pay for this with hangovers, you severely impair your coordination and decision making skills while under the influence of this poison. This has led to no end of misery over the millennia that humans have figured out it’s fun to drink fermented liquids.

At Kenzai, when we work with trainees to get in top physical shape, we take drinking off the table. It’s simply incompatible with all the other tasks that go into eating well and exercising. Of all the guidelines we advise, the “no drinking” is by far the one that causes the most uproar.

But we’ve seen with thousands and thousands of clients over the years, just a few weeks without alcohol does an amazing job of lifting the veil on the true cost of booze. Common reactions include statements like:

Everyone has their own boundaries and personal issues wrapped up with alcohol. But if you haven’t gone a few weeks without drinking in a while, give it a try when the time is right. You might be surprised how much of a hidden cost your body has been paying.

But if you do decide to go out for a big night, you now know how those toxins interact with your body, and have some defense for the next day hangover. These tips will help, but nothing will ever beat simply not drinking to excess, or not drinking at all.