In the past week I’ve learned more than I ever wanted to know about how the cast of Friends is doing 20 years after the show went off the air. I never watched Friends when it was on TV, I haven’t thought about those actors in years, and yet I now know what foods they like, who they’re dating, their favorite memories of the show, and on and on.

I know all this because apparently there was a 20th reunion episode last week, and every news website had a fluff piece on one of the actors featured prominently on the page. These news outlets sure were on top of this entertainment story, weren’t they?

Or perhaps, just perhaps, these were not really fun news stories but paid product placements, part of an organized marketing campaign to boost interest in the Friends franchise of programs and merchandise?

This type of cash-for-coverage transaction happens every day, in every media outlet. It’s part of the business model for any media organization. Anytime you watch or read the news, a few of those stories aren’t there because they’re the most important or relevant, but because someone paid for them to show up there, to be digested by your eyeballs and brain, whether you were interested in the topic or not.

With the Friends stories, the shilling was obvious for anyone to see. It’s easy to keep your guard up, roll your eyes, and move on. But one area you might not have your guard up for is when the media talks about the next superfood. Just as through osmosis I soaked up all this information on the cast of Friends, you’ve probably soaked up a mental list of supposed superfoods over the years.

Some of the biggest hits from the past decade include: 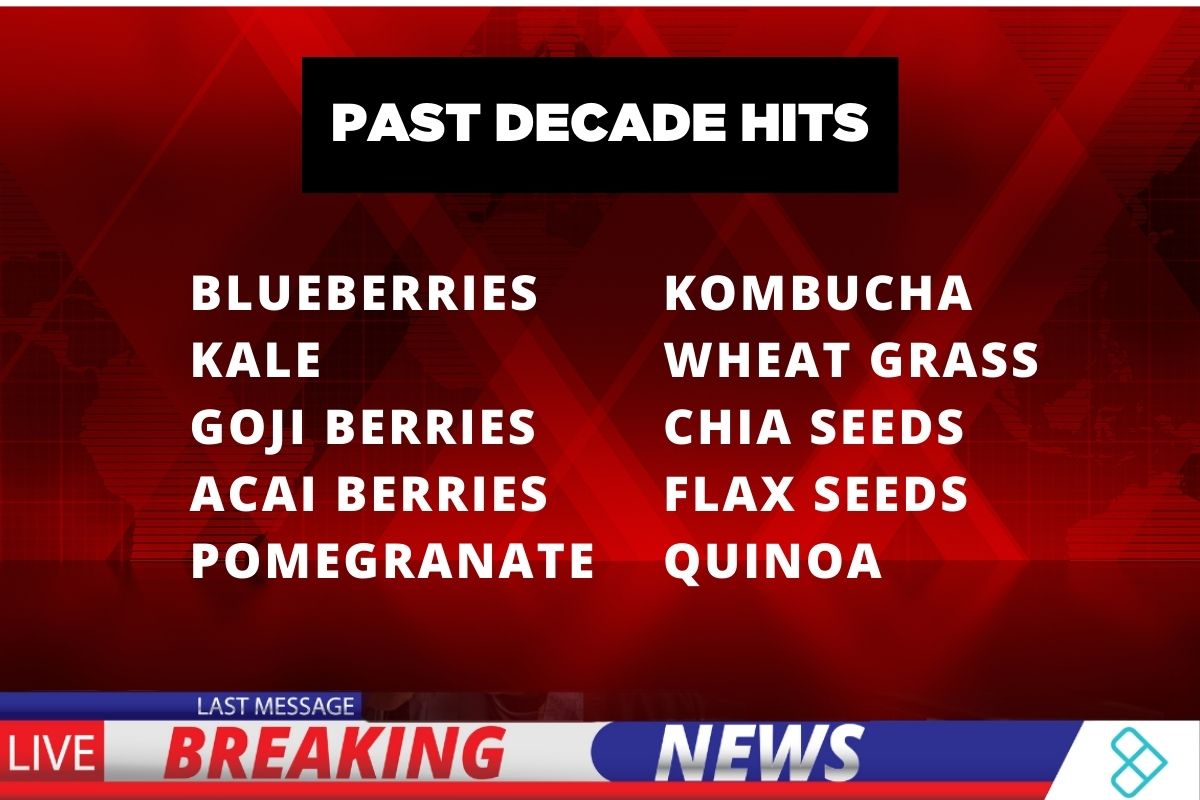 Christening something a superfood is big business. When a food catches on as the next superfood, it can literally double the amount of farming demand for that item (this is what happened when blueberries became a superfood darling in the late 90s, acai berries in the 2000S, and kale in the 2010s).

The thing you need to keep in mind is that ALL of these superfood surges are a product of PR firms, not nutrition experts. There’s no better example than the kale boom. Food writer Eve Turow has a wonderful piece on this, but here’s the outline of how humble, bitter kale became THE NEW HOT SUPERFOOD, KALE!

Step 4: For you, the casual observer, it will look like kale organically ramped up from something randomly heard mentioned by a celebrity to suddenly being everywhere; the “it food” for a new generation of young, cool, healthy people. And you want to be young, cool, and healthy too right? So you order the kale at a restaurant, and some at the supermarket. For the marketer, this is mission complete.

In the big scheme of things, what’s the big deal? Marketing is just how things are done, and if it ends up with more people eating kale, drinking pomegranate juice, or choosing quinoa over pasta. What does it matter?

There are four big problems with the concept of “superfoods.” (I’ll stick with the example of kale, but this applies to any trendy superfood you come across). Let’s break it down.

Looking at kale from a nutritional perspective, it’s a fairly normal leafy green vegetable. In one CDC study, 14 other vegetables ranked higher than it for nutritional density, including some “boring” old standbys like cabbage and spinach.

It’s true, kale has a lot of Vitamin A. But Vitamin A alone does not make a healthy person. You need dozens of other micronutrients which kale only has a fraction of. You’d get much more Vitamin C from a strawberry, or Vitamin B from an avocado. Your body functions best when you graze on a wide variety of natural food sources.

When someone buys into the superfood pitch, they’re giving undeserved significance to one particular food. This leads to “silver bullet” thinking, such as “I ate all that kale at lunch, so I can get away with pizza for dinner tonight, right?” It’s not so easy! You need a full spectrum of fruits and vegetables to cover all your bases, and most of those aren’t superfoods, they’re just… regular old food.

Maybe you don’t like kale. You find the stalky texture unpleasant and the bitterness off-putting. But because you’ve heard it’s such a wonderful food, you hold your nose and choke it down. This is THE WORST kind of food interaction I can imagine. Eating right shouldn’t feel like a punishment. When you get into that mindset, your healthy-eating attempt will falter. The human mind can only take so much sensory dissatisfaction before it rebels, and you find yourself diving into a plate of unhealthy food that you actually enjoy.

Suffering through a food because of its “super-ness” is a bad deal. As discussed above, it’s not really that super, and you’d be just as well off having a fruit or vegetable that you actually enjoy. Don’t buy into the fallacy that the less appetizing a natural food is, the better it must be for you!

Due to the quirky, bitter flavors of many superfoods, you often see this dressing-up happen as food manufacturers try to shoehorn them into mainstream eating trends.

A piece of kale is pretty boring. It didn’t take long for someone to realize you could dunk dried kale in oil and fry it up. Now we have Kale Chips. All the nutrition of a superfood in a tasty package? What’s not to love?

Well, one thing not to love is that 1 ounce of these chips is 130 Calories. That’s just slightly better than 1 ounce of Doritos, which comes in at 140 Calories. At least when someone eats a bag of Doritos there are no illusions about the healthiness of the food choice!

We see the same thing with fruits like acai, which promote their high antioxidant superfoodiness. But the most popular use of acai is in an acai bowl, where fruit, malted oats, and honey are added on top, easily exceeding 400 calories per bowl. Not super!

Nutritionally, this is closer to a dessert than a healthy snack. Why do acai berries have to be dressed up so much? Because without added sweetener and blending, they’re extremely bitter and unpleasant. This is the story with many superfoods!

Our world is saturated with sneaky ads and paid product placements. These campaigns already hold a surprising amount of sway over your choices, even if you think you’re the kind of person who “advertising doesn’t work on” (It does).

When a fruit or vegetable becomes the next big superfood, it isn’t because a nutritional panel had a conference and decided to promote it. It’s because somewhere, someone is looking to offload a bunch of that product into the market. It could be that unusually good crop yields have created a glut of a certain fruit, and a Wall Street firm sees the opportunity to lock in an attractive futures contract on it. They then call up their Madison Ave. PR firm and get the gears turning to create demand. Influencers start featuring the fruit in their photos, Dr. Oz does a segment on it, the national coffee chain has a drink that contains it, and in just a few months you find yourself giving it a try because of all the hype.

Everyone in this situation has made money except for you. You’re the one at the end of the chain, eating a strange, sour fruit that you don’t really like. But it’s a superfood so you better suck it up and take your medicine

This doesn’t mean you shouldn’t try new natural foods. Please do! But don’t feel like you’re missing out by not loving the latest superfood as part of your regular rotation. Explore the culinary world, keep what you like, and don’t force the foods that aren’t doing it for you. As long as you have a wide variety of fresh foods in the mix, your nutritional coverage is going to be totally fine!

No one superfood is going to get you a good health result. What will get you results is including plentiful, fresh fruits and vegetables in every meal (not covered in batter, oils, cheeses, dressings and sauces).

Plants are the superfood. And in the wide, diverse plant kingdom, you WILL find textures and tastes which work for your palate. These choices don’t need to be pricey or exotic… they just need to be plants! It really is as simple as that.