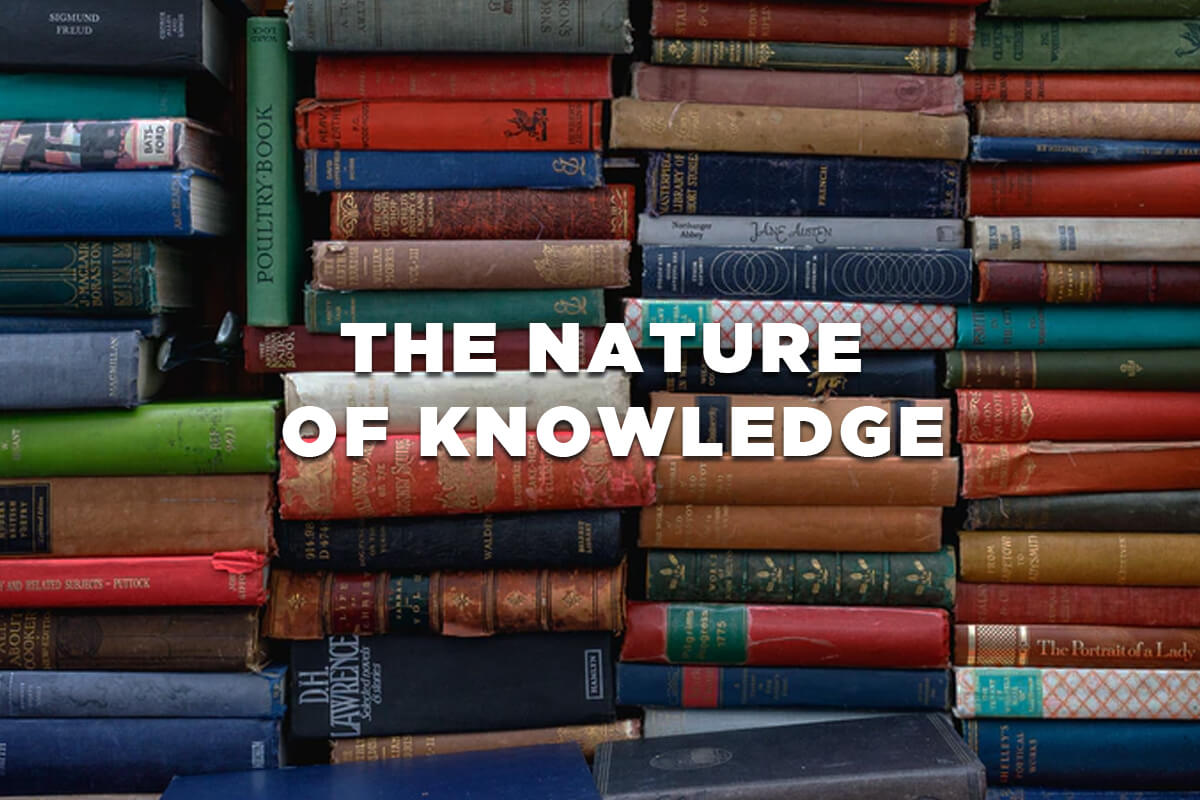 The Nature of Knowledge

Take a piece of paper and draw a circle in the middle of it. Label this circle "Stuff I know." This circle encapsulates all the knowledge that you've gained in the course of your life.

This includes things like your first pet's name, where your house keys are right now, and the way an apple tastes. Everything you know. There's a massive amount of data crammed in that circle.

Now draw a second circle that encompasses the first one. Label it "Stuff I know I don't know."

Naturally, this second circle will be bigger than the "Stuff you know" circle.

Let's draw one more circle that goes around the first two. This one can be labeled "Stuff I don't know that I don't know."

To see this in action, click on the "?" button below. It will open up a new tab with a randomly selected page from Wikipedia. Hit the button as many times as you like. 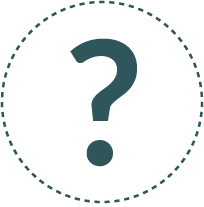 I just hit it a few times and came up with a public library in New Hampshire, a village called Vatersay in the extreme west of the Scottish isles, and ATRACO FC, a Rwandan Football club which was disbanded in 2010. Before I clicked that button all three of these things existed in the third circle of things I didn't know I didn't know. Now they're in the second circle, and perhaps one day they'll make it to the first (if I visit Vatersay for example).

What I find absolutely thrilling is that there are people in the world for whom each of these items is firmly in their first circle of knowledge. Somewhere out there is a retired Rwandan footballer who played on that defunct team and could talk all night about it over a bucket of Sorghum beer. For every single random link you click there will be people who care passionately about it and could write dissertations on it. The breadth and depth of human knowledge is awe-inspiring, and every day I curse the reality that I only have a few paltry decades to explore it before my body fails me and the light is extinguished.

Now that we've established these three tiers of knowledge, we can start to think about what we know with some fresh perspective.

My four year old daughter, for example, has knowledge circles that are something like this:

She knows a lot and is learning more every day, but the things she "knows she doesn't know" are limited and quite close to the things she currently understands. For example, she gets how to put on her shoes, but knows that she doesn't know how to tie her shoelaces. She "doesn't know that she doesn't know" that those shoes were made in China and are a product of a global trade system involving massive cargo ships moving across international waters and government regulations and import duties and tariffs and protectionism vs. the free market and the endless things that unspool from there.

As a child grows up she learns that there are a great many things in the world that she doesn't know about, and her second circle will get bigger and bigger. For me, growing this second circle is the byproduct of a rich intellectual life. I like to think my own circles of knowledge look something like this.

This is the irony of becoming smarter and more well-informed. It can actually make you feel stupider. You realize how in the big scheme of things you really know very little, and that no matter how much you study and persevere to grow your inner circle, the middle circle grows at an even faster pace in all directions. This is just part of the deal when you're trying to become wiser.

This is where we run headlong into the Dunning-Kruger effect. In 1999 David Dunning and Justin Kruger did some research at Cornell university that proved a fact that we intuitively know; incompetent people generally overestimate their skills and abilities, while competent people underestimate their skills and abilities. The reason is precisely what we've been discussing, people who have small "know I don't know" circles think that they've basically mastered the topic at hand, while those with more experience are keenly aware that the world is complicated and there's much more to be learned about any given topic.

"One of the painful things about our time is that those who feel certainty are stupid, and those with any imagination and understanding are filled with doubt and indecision." - Bertrand Russell 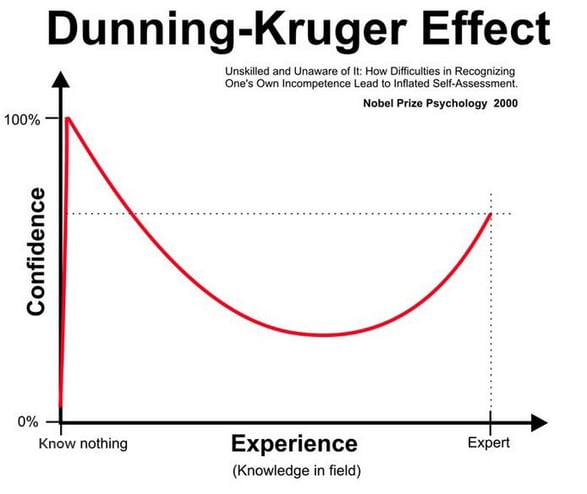 The unfortunate side effect of this is misplaced confidence. As Bertrand Russell said in the 1930's, "One of the painful things about our time is that those who feel certainty are stupid, and those with any imagination and understanding are filled with doubt and indecision." 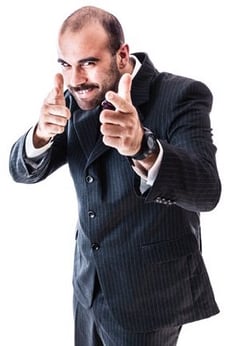 Most of us are open, trusting people. When someone approaches us with absolute confidence we tend to believe that their confidence has been earned with study and experience. But the Dunning-Kruger effect tells us that confidence can be a leading indicator of naivety and inexperience.

Nowhere is this more true than when dealing with health and fitness. The body is a huge bundle of known unknowns and unknown unknowns. While we understand the basic workings of cells, organs, muscles, and bones, when the rubber meets the road of a real person living their life, the number of confounding variables becomes so large that it becomes folly to assume you have the one single answer for a health issue.

In the course of your life you'll meet all kinds of people who have Dunning-Krugered their way into a false sense of confidence about how to stay healthy. The biggest giveaway is the "silver bullet" approach, in which one single thing is credited with huge shifts in wellness. It might be juiced kale, red wine resveratrol, a vitamin supplement, intermittent fasting, an exercise gadget or a particular form of workout.

The body is a complicated tangle of feedback loops and interdependent systems. It's designed from top to bottom to maintain homeostasis and not be dramatically affected by any one input. When someone is proclaiming they've got the silver bullet they're either misinformed or outright lying to you. Whichever it is, they're going to be utterly confident in their delivery, and you'll need to guard against your natural inclination to trust a confident person.

This is why, week after week at Kenzai, we keep coming back to the accepted mainstream science behind staying well; eating a varied diet consisting mostly of plants, getting moderate exercise that stimulates your heart, lungs, and muscles to stay healthy and strong, and above all consistency in these two things, not just for a few weeks but month after month and year after year.

I hate that this sounds mealy-mouthed, as if we're hedging our bets or holding out on giving concrete advice. But, given the complexities of the body and the intricacies of psychology, this is the strongest statement I feel comfortable making to a general audience. It's not sexy, and its certainly not the fastest way to makes sales and move products, but it has the advantage of being advice won from knowledge and experience.

The wonderful thing about the Dunning-Kruger effect is that it's one of those things that, once you understand it, makes you less likely to be victim to it. When you're the incompetent one (as we all are at some point), you're less likely to make a fool out of yourself and mislead others. When you're the competent one, it gives you a little more backbone when calling others out on their BS and pointing people towards the truth. Either way you make the world a better place.

Keep growing your circles! Delight in passing knowledge through the different membranes from unknown to known unknown to known, and make a special effort to avoid introducing bad information into the system. Question sources, ask "why", and never stop learning.

Gaining knowledge and sharpening your intellect are activities with zero downside. You keep your faculties longer, you become a better family member, citizen, and human being, and you push forward the global project of getting ourselves out of the dark ages and towards a better future for us all. Keep pushing on the walls of those circles and lets see what's out there!