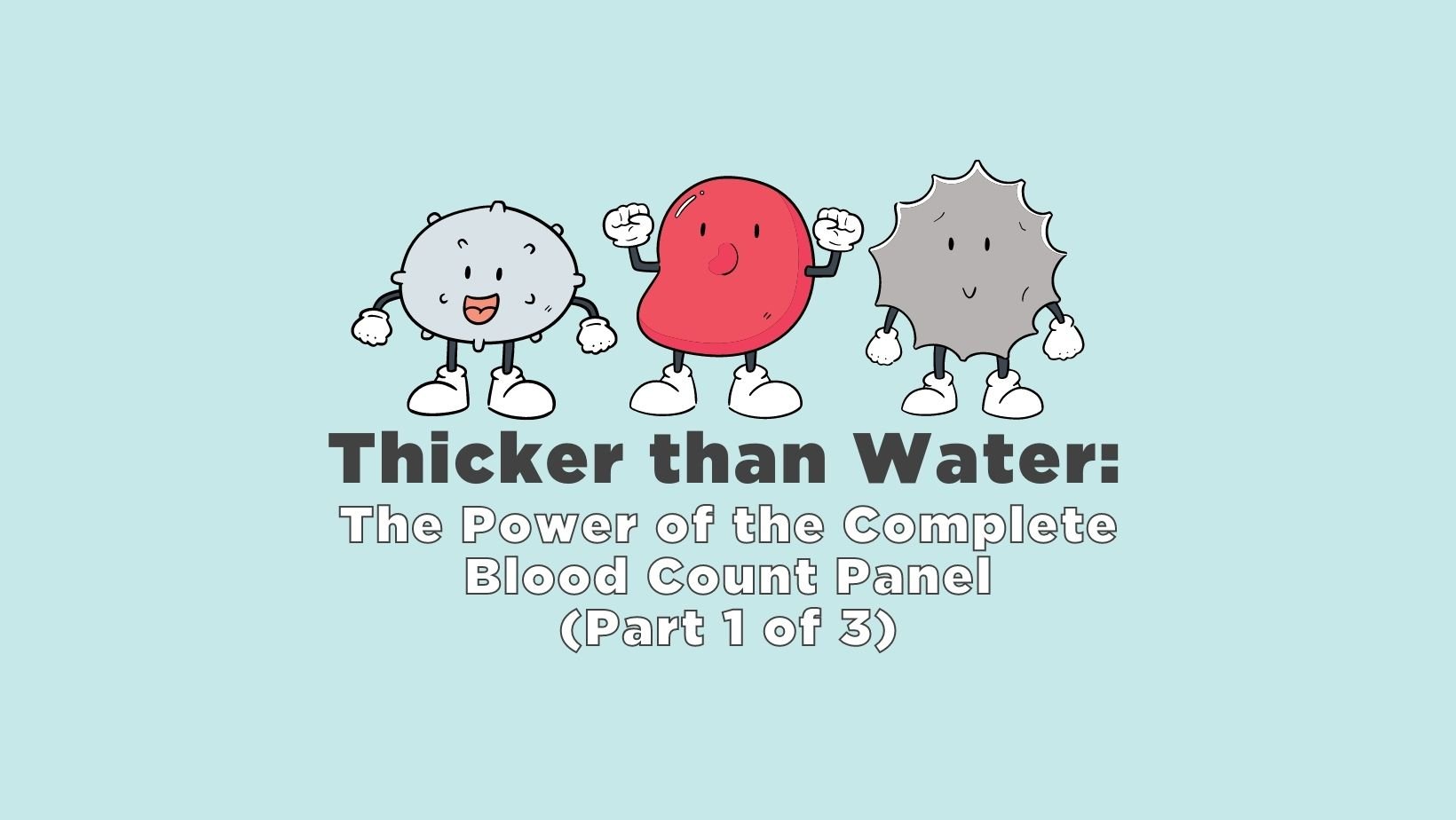 PULSE - Thicker Than Water: The Power of the Complete Blood Count Panel (part 1 of 3)

For nearly all of human history, the body was essentially a black box. We ate and drank foods on one end, excreted them on the other, and somehow the body kept living and thriving. Everything “just worked” until one day an odd symptom would appear, and we’d have to wait and see if it was a passing ill-humour, or (gulp!) a disease that would cripple or kill us. We didn’t even understand how babies were made until 1875!

For the past 150 years, science has been finding new ways to peer into the body and understand what’s going on in there. We now have x-rays, MRIs, CAT scans, and ultrasound to get visual information from the inner body. But there’s no better way to know what’s going on at the cellular level than extracting a few tubes of blood and sending them to the lab.

When economists want to check on the fiscal health of a country, one of the first things they look to is the transportation sector. Shipping is how big interconnected economies work. If every plane, boat, and truck were to stop tomorrow, we’d be just a few days away from total societal collapse.

Blood serves the same function for the complicated, interconnected body. It takes about one minute for your blood to make a complete lap of your circulatory system (much faster if your heart is pumping hard), and your body makes incredible use of each of those laps. As your blood circulates, it’s constantly picking up and dropping off nutrients, building materials, hormones, immune cells, and waste matter. It brings “just in time” shipping to the next level!

This is why a blood panel is such a useful diagnostic tool, and so often requested by your physician and health care providers. It’s the medical equivalent of lifting the lid on the black box and getting rich, detailed information on what’s going on inside. It’s magical!

Unfortunately, for the average person, the result of a blood panel is presented as the most unmagical, clerical chore you can imagine. A long list of obscure terms with even more obscure measurements next to them. Most of us simply look for numbers that are out of the range and chalk the rest up to medical esoterica. 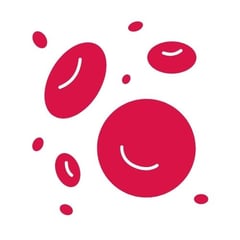 If only you had a cool, smart friend to look at your blood test with you, and help you understand what all the terms mean, and why they’re important. Today we’re going to be that friend, and break down your blood test in simple, accessible terms. By the end of this series of articles you’ll have a good working understanding of what a blood test tells you. Compared to someone from the 1800s, you’ll literally be a super-genius when it comes to the human body!

Let’s dive in. If you have a recent blood test handy pull it up and you can follow along. We'll start with the most common blood panel, the Complete Blood Count (CBC). 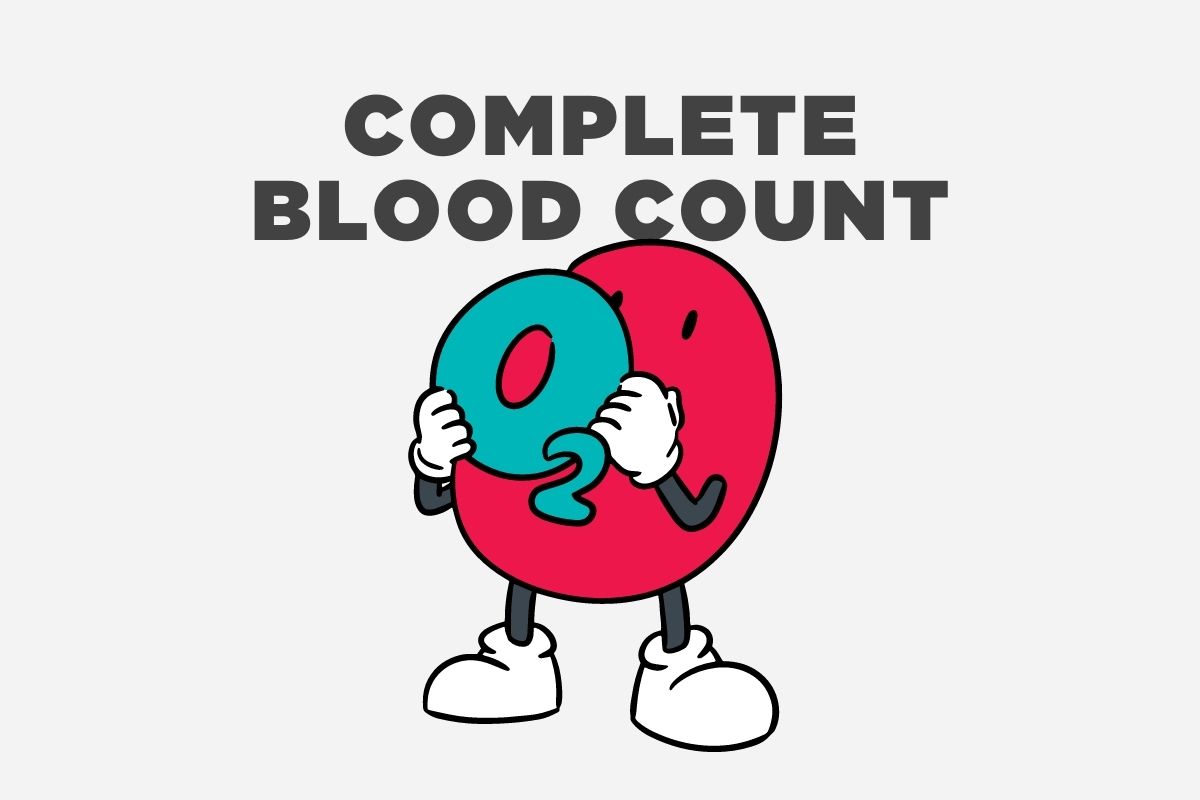 The most basic analysis that can be done on blood is simply looking at what kind of cells are present, and in what concentration. The main types of blood cells are red blood cells, which transport oxygen and carbon dioxide, white blood cells, which float around the body to fight disease, and platelets, which are little cell fragments that are able to form protective clots when part of the body is damaged. All of these structures are suspended in the plasma, a watery solution of salts and enzymes.

Most people don’t have a good sense of the ratios involved here. An average sample of blood will have the following breakdown: 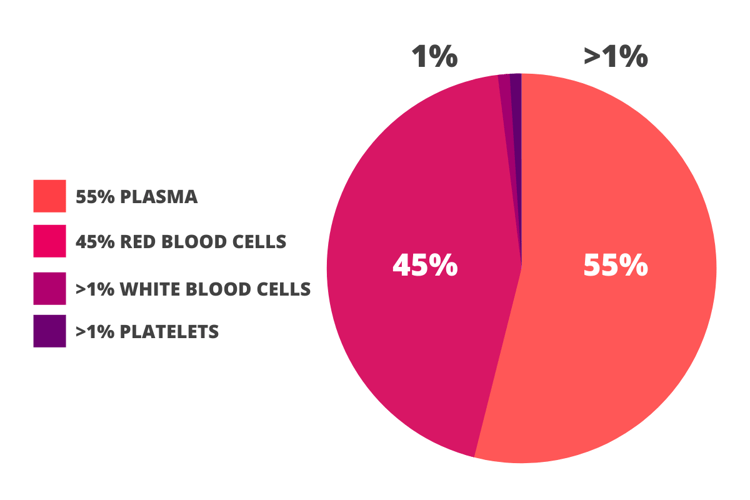 This means to understand how many of the different cells you have, a lot of post-processing must be done on your blood sample. The sample is centrifuged, partitioned out, and sent through various machines. Making clever use of visual, electrical, and chemical analysis, the testing center can get highly accurate readings of how many of the different types of each cell you have.

In the old days, it was only possible to get a raw count of the cells, but with improved technology most blood tests now come back as a “CBC with Diff” meaning Complete Blood Count with Differential. This higher fidelity test can tease out not just the main cells but the smaller details of the bloodstream. Let’s go over what your CBC with Diff will have on it. 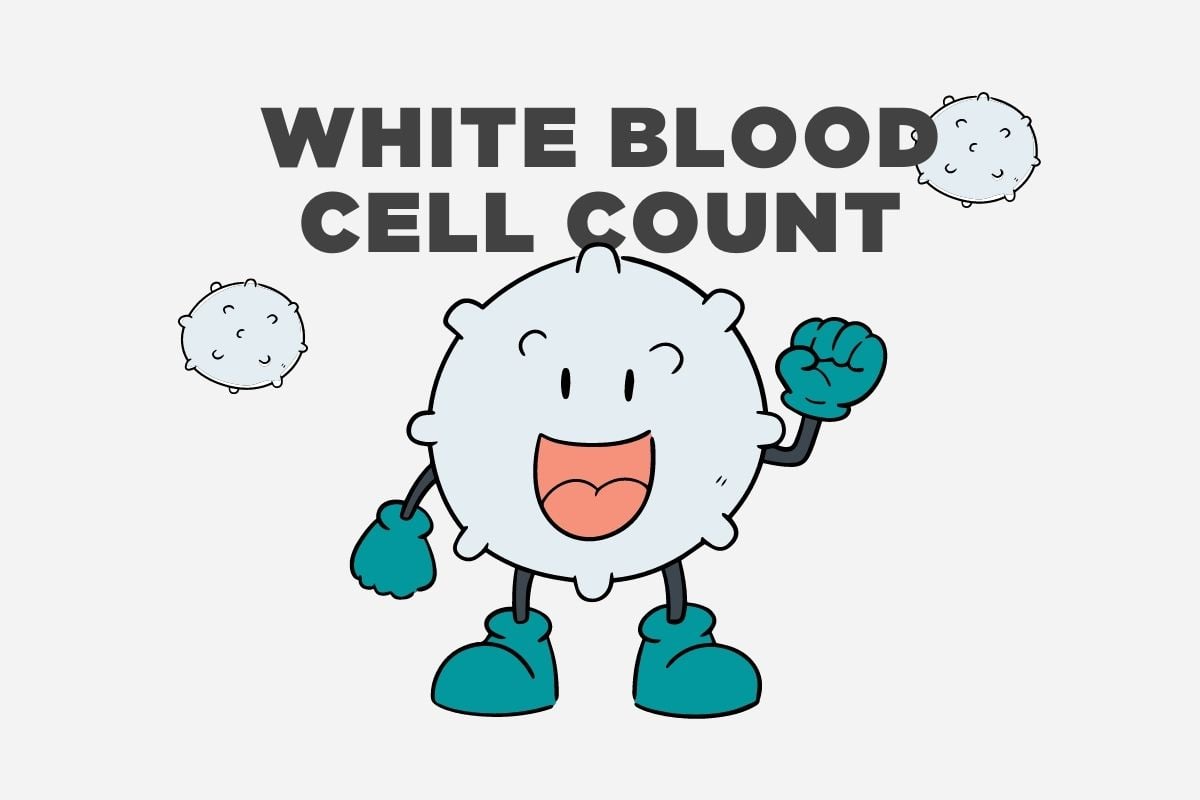 Your doctors are extremely interested in what’s up with your white blood cells, because they’re a leading indicator of the body dealing with disease and disorder.

If your WBC is low:

A low white blood cell count is a state called leukopenia and can indicate several problems:

If your WBC is high:

You might think more white blood cells is a good thing, but this too, indicates that the body is disordered. 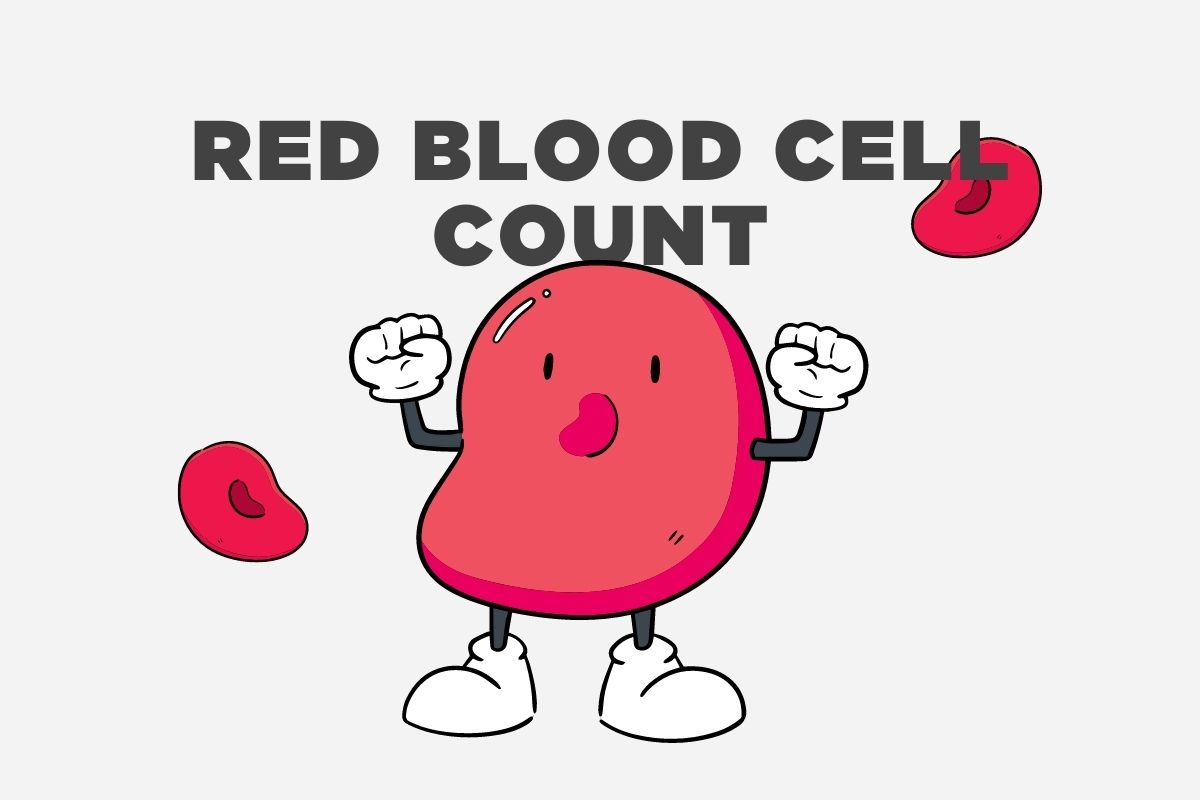 Red blood cells are little ovals filled with hemoglobin, a protein which is able to transport oxygen to the cells around your body, while picking up carbon dioxide waste on the return trip the lungs. The key molecule in hemoglobin is iron. Just as an iron nail is able to interact strongly with oxygen when it rusts, the iron in your red blood cells is able to dynamically interact with the O2 in your body, constantly picking oxygen up and letting it go when cells need it. This is always a good place to point out that all the iron on earth was forged in ancient stars that exploded into interstellar dust which accreted into the planets. No ancient stars, no iron, no iron, no life (as we know it). 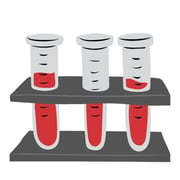 This is why your blood test will tell you not only your raw red blood cell count, but how much hemoglobin is present. You’ll also see a result called hematocrit, which shows what percent of your blood is red blood cells. Usually these metrics move together, but not always. For example, if you have a low RBC but normal hemoglobin, that indicates something is wrong with how the red blood cells are forming, as seen with such diseases as sickle cell anemia. If you have normal RBC and low hemoglobin, it points to a problem with your iron uptake, or lack of iron in your diet. But for most people, RBC, hemoglobin, and hematocrit will move in sympathy.

If your RBC is low:

If your RBC is high:

Red blood cells are the energy transport of the body, but you don’t want to have too many of them! There are several root causes of a high red blood cell count:

Platelets are, in a word, weird. They’re not full cells, but fragments of cells that look like little amoebas with tendrils stretching out in all directions. Platelets float around the blood, waiting to spring into action if you sustain an injury. When the body signals an area is damaged, platelets flood the zone, and with their tendrils clog up the wound so that you don’t bleed out. This was an extremely helpful adaptation for life, as in the wild we tend to spend a lot of time getting bruised, poked, bitten, and broken.

On your blood test, you’ll see a test for platelets, and sometimes something called MPV (mean platelet volume) which measures the size of the platelets.

If you’re low on platelets, you’re at risk for excessive bruising and bleeding. Some things can cause this:

High platelets are also bad news, because it makes you more likely to have unwanted blood clots which travel around the body and cause trouble when they get stuck in blood vessels. 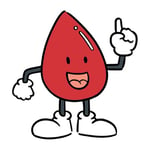 Now that you have a grasp of the three types of blood cells, you can easily understand what the more granular metrics are on the complete blood count blood panel. We’ll run through them quickly here.

This is mean corpuscular hemoglobin and is a measure of the average amount of hemoglobin in the red blood cells. It’s closely related to the problems of outlined about in the MCV red blood cell sizes.

It turns out there’s not just one type of white blood cell, but five (or more, depending on how you split hairs). The different white bloods cells are similar in appearance, but have small structural differences which allow them to specialize at tackling a particular type of threat to the body. Peering into the blood to tease out all these different types of white blood cells is what puts the “Diff” in “Complete Blood Cell Count with Differential.”

How does your doctor use this granular information? If one particular type of white blood cell is overrepresented in the blood panel, it’s a clue as to what’s causing problems. For example, if there are a large number of neutrophils, it’s a hint that your issue is bacterial in nature. Higher eosinophils would point to a parasite. Isn’t it amazing what your blood can tell you!? 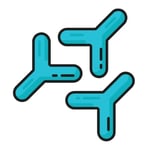 This is your immunoglobulin count. Immunoglobulin is the “goop” of protein antibodies in the bloodstream. High IG indicates your body is busy fighting off a disease or illness. If they remain high for multiple blood tests it points to a chronic condition. If you’re immunoglobulin is low, it’s usually a genetic condition or side effect of immunosuppressant medication.

This covers what you’ll see on a typical CBC with Diff blood panel. This blood test is most useful for telling your doctor about any high priority, immediate threats to your health. It’s also where blood disorders and cancer will make themselves known. If you get back a CBC panel with all normal numbers, rest easy knowing that your body is functioning well and in no immediate danger.

This is just the tip of the iceberg however! There are two other tests you’ll have access to as part of normal blood work. These are the metabolic panel and lipid panel. We’ll dive into those tests in upcoming installments.

We hope this brief, simplified breakdown of the CBC with Diff panel has not only informed you, but humbled you to how amazing and powerful your body is. While you rush around handling the problems of the day, your blood is constantly on the move too, circulating at 2 meters per second throughout your body, carrying oxygen, busting up infections, and healing wounds. Appreciate the beauty of your blood, and do your best to keep it in your body by making smart, safe choices!