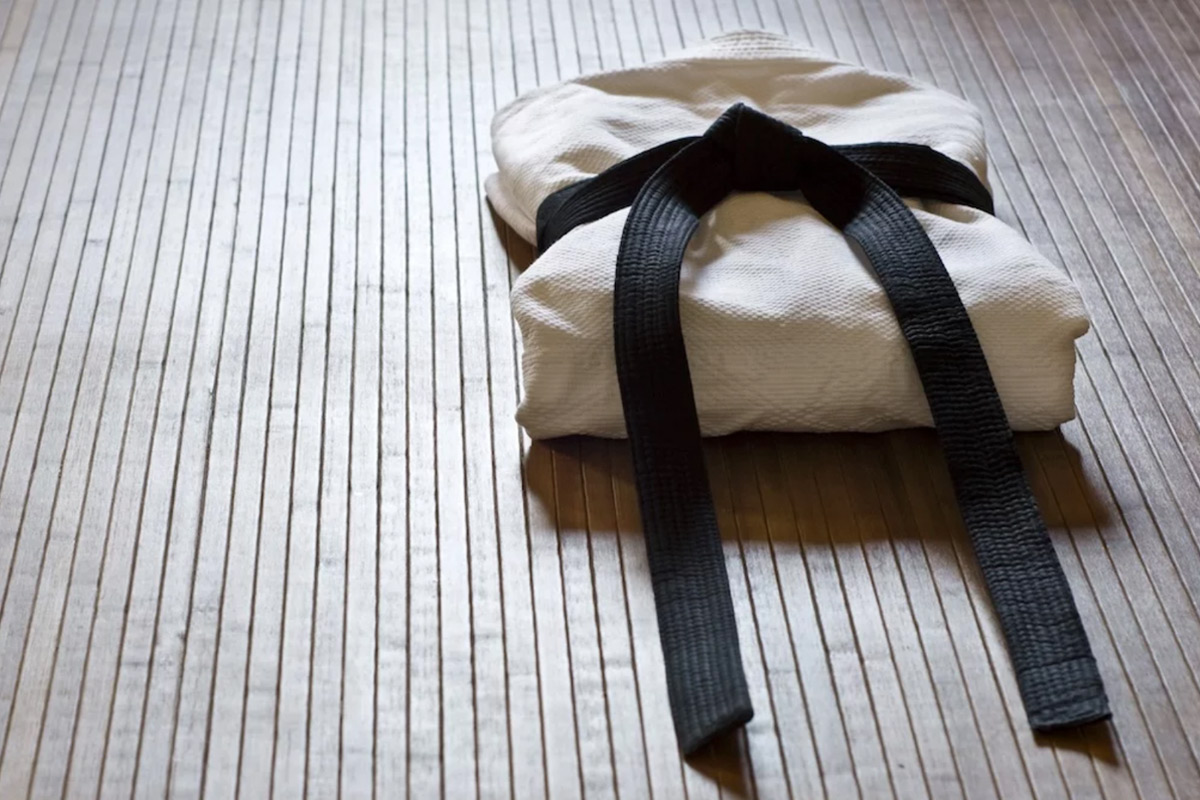 My first karate teacher, Ishida Sensei, was a massive block of a man. He was middle aged with spiky, graying hair, about 170 cm tall (5'6"), but easily as broad and as deep as two men. He had a huge barrel chest and legs that were thicker than my torso. He could easily shatter any bone in your body with his wickedly powerful kicks. I once held a heavy duty pad for him as he went through a kicking demonstration. The next day my arms were purple with bruises, even with a  kick-pad as thick as a mattress.

And like most people who could snap your neck as easily as a twig, he was one of the most cheerful and gregarious people I've ever met. He howled with laughter throughout his classes, he'd even be laughing during your sparring sessions with him. As you were pushed to your limit, breath ragged, your vision blurring from effort and fatigue, he'd be blocking your attacks, giving advice, destroying you with kicks and punches, and GIGGLING. That's just the kind of guy he was.

I started training at his dojo when I was about 26 years old, which, as a foreigner, naturally meant I was placed with the kids. Little kids about 10 years old who would kick my ass regularly. Needless to say, every practice was a humbling experience.

Ishida Sensei's dojo was located on the third floor of an old building above a busy shopping street in Tokyo. During breaks you could hear the chatter of the crowd below and watch everyone go about their shopping from the window.

One day during practice a shipment of new pads and gloves arrived. The shipping company left the gear in about a dozen boxes down on the street. After signing for the delivery, Ishida Sensei said "Hey, kids, go down and bring those boxes up." (I, of course, was included in the "kids.")

So we stopped our practice and made our way to the changing area. A few of the boys started loosening their karate gi, the iconic white practice uniforms of karate. They were going to put on t-shirts to go downstairs. Ishida Sensei stopped the exercise he was leading with an older student, and said, "Hey, what are you doing!?" (Note that from here on I'm translating from Japanese quite liberally, to get at the heart of this story better)

"We're going to get the boxes, Sensei," one of the boys said.

"No, why are you taking off your gi?"

Ishida Sensei brought the whole class to a stop.

The boy who spoke up was looking pretty pale at this point.

Ishida gestured to the window that looked out over the busy street.

"Come here, all of you, come over here."

We nervously gathered around him.

"Look down there. Look at all those people. Shopping. You come here to train. You put on your gi, you make your bodies stronger. You make your minds stronger. And YOU'RE embarrassed!? You know who should be embarrassed? THEM!"

At which point he yanked open the window and started shouting to the crowds below. "Hey! Everyone! Aren't you embarrassed!? Aren't you ashamed!? Look at yourselves! Your bodies are weak! You have no discipline! Tell me, WHERE IS YOUR GI!?" He roared with laughter from that big barrel chest of his.

This was some seriously un-Japanese behavior. We were speechless.

Ishida Sensei slammed the window shut and turned to the boys, his face suddenly serious.

When you make a dedicated effort to get in shape and eat right, you're going to end up in some socially awkward situations. Maybe it's your first day at the gym and you're not sure how to use all the equipment. Maybe you've just started jogging and you feel ridiculous as you sweat and huff while cars drive by. Perhaps you have to be that annoying person who orders off-menu at a restaurant because you don't want to blow your nutrition plan. Or you're traveling and end up jumping rope in a hotel parking lot, feeling like a weirdo as other guests come and go.

Whenever you're making a good choice for your body, and you find yourself in public, remember that you are the last person who should be embarrassed.

You're the one stepping up and doing something good for your body. You're the one who showed up. You have nothing to be ashamed of. Even if your uniform is a tattered old t-shirt, wear it with pride. I still have to remind myself of this. I stretch while waiting for the train. I do workouts at unused airport gates before my flights. I've had to stand in front of large crowds in spandex. When I feel a bit bashful, I tell myself. "Why are you embarrassed? You're doing something good. Where's their gi!" It helps!

And a final point here. Imagine you saw a bunch of kids pour out of a building in karate uniforms. Would you laugh and say "look at those losers!" Or if you saw a new jogger struggling up a hill as you drive by,would you snicker? If you're like most people you'd probably wouldn't even notice, and if you did notice you'd think "Good for them!"

This is the truth about social awkwardness. It's usually all in our heads. I've never actually experienced any negative reaction to exercising or eating right in public. On the other hand, I have received lots of positive feedback, lots of good-natured questions, and even made some friends through it. When we let that fear of embarrassment dictate our actions, we end up closing off a lot of opportunities to connect with people. Our dumb brains tend to think the worst of others, but the reality is that most people are kind, supportive, and deathly afraid of embarrassment themselves. So just do your thing. It'll break the ice!

And if you ever do find yourself feeling shy as you eat right or exercise in public, remember the laughing, booming voice of Ishida Sensei saying "You know who should be embarrassed? THEM!"